What Does The Pentagon Say About China-India Conflicts?

The “PRC-India Border Standoff” is covered as a “special topic in this report.  The report states that the PLA’s Western Theatre Command sees India, Xinjiang and Tibet regions, and Central Asia as primary concerns. 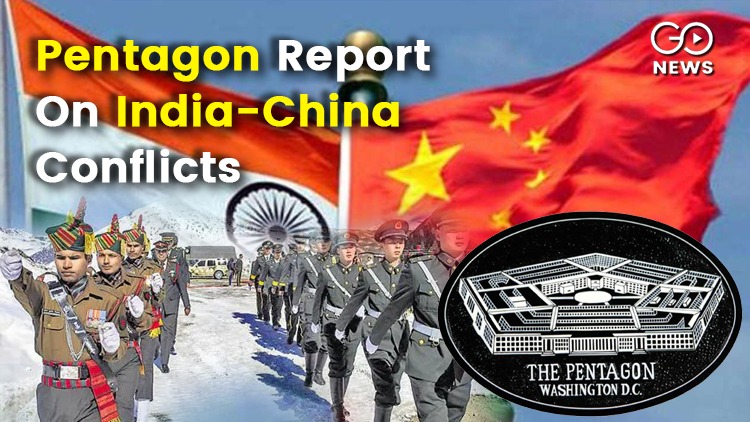 The United States’ Secretary of Defence has submitted an annual report to Congress titled ‘Military and Security Developments Involving The People’s Republic of China 2021’ in which it is stated that “the PRC is increasingly clear in its ambitions and intentions. Beijing seeks to reshape the international order to better align with its authoritarian system and national interests, as a vital component of its strategy to achieve the “great rejuvenation of the Chinese nation.”” Modernization of the PLA (People’s Liberation Army) is the key facet in Beijing’s “rejuvenation” strategy to be achieved by 2049. In 2017, during the 19th Party Congress, President Xi Jinping set two milestones for this objective: “to “basically complete” PLA modernization by 2035 and to transform the PLA into a “world class” military by 2049”.
Also Read:
Canada: Why Are Children's Graves Being Found In Schools?

India-China Stand Off At LAC The “PRC-India Border Standoff” is covered as a “special topic in this report.  The report states that the PLA’s Western Theatre Command sees India, Xinjiang and Tibet regions, and Central Asia as primary concerns. The first loss of life along the LAC since 1975 occurred in Galwan valley in June 2020. 20 Indian soldiers died and the number of Chinese casualties remains unknown though 4 were awarded posthumously by Chinese CMC (Central Military Command) Flashpoints of disputed areas along the border have been fortified by increased Chinese troop presence:  “In May 2020, the PLA launched incursions into customarily Indian-controlled territory across the border and has concentrated troops at several standoff locations along the LAC. India is an important US ally in the region, and the report has even commented on the fact that China sees this relationship as India being “merely an instrument of US policy in the region”. China has expended diplomatic efforts into preventing formation of effective ties between the United States and India “during and after” the standoff in 2020 in Galwan valley, according to this report. China’s Village In Arunachal Pradesh Part Of “Incremental “ Strategy China is deploying an “incremental strategy” to press its claims in the LAC. The US report cites  “a large 100-home civilian village inside disputed territory between the PRC’s Tibet Autonomous Region and India’s Arunachal Pradesh state in the eastern sector of the LAC” built by the PRC “sometime in 2020” as part of this strategy. The Indian government and media have vehemently opposed construction of infrastructure in this region. On its part, China says that its troop deployments to the LAC were a response to Indian “provocation”: “Beijing has refused to withdraw any forces until India’s forces have withdrawn behind the PRC’s version of the LAC and ceased infrastructure improvements in the area”. As of June 2021, there is a large-scale troop deployment by both countries along the LAC. The report states until April 2021 there have been 11 rounds of Corps Commander-level talks between the two sides which has “yielded limited disengagement”. The 13th round of these talks were held in October 2021. After the latest 13th round, India stated that “During the meeting, the Indian side [therefore] made constructive suggestions for resolving the remaining areas but the Chinese side was not agreeable and also could not provide any forward-looking proposals. The meeting thus did not result in resolution of the remaining areas”. China’s response was that Indian demands are “unreasonable” and could risk another military conflict, as said in the state-run Global Times. Chinese Army PLA’s Modernization Efforts The 2020 Galwan valley standoff is mentioned in context of China improving its military’s communications and technical capabilities. “At the height of the border standoff between the PRC and India in 2020, the PLA installed a fibre optic network in remote areas of the western Himalayas to provide faster communications and increased protection from foreign interception”. The PLA is also increasing its capabilities in “informatized war” and EW (electronic warfare)( by incorporating emerging technologies it is “future information systems” including AI, Big Data, and IoT (Internet of Things) China’s Economic Heft And RECP India exited from the Regional Comprehensive Economic Partnership (RCEP) negotiations in 2019 which was signed on November 15th, 2020 and described as “a significant trade agreement designed to open up trade in goods, services, and investments among its members”.  This move will increase China’s already burgeoning economic heft within the bloc and the region in general.