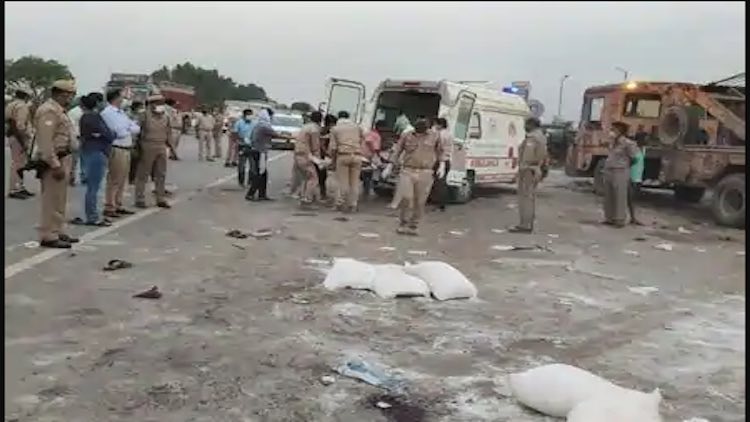 Migrant labourers compelled to go back to their homes due to the lockdown are becoming victims of accidents repeatedly. Now, 24 labourers have died in a collision between a DCM and a truck in Uttar Pradesh’s Auraiya. The labourers belonged to Bihar, Jharkhand and West Bengal and had started out from Rajasthan. Also Read: Indian Base In Lockdown After Coronavirus Scare In Antarctica

Auraiya DM Abhishek Singh said that the accident took place at around 3.30 a.m. Apart from the 24 deceased labourers, 15-20 labourers have been injured as well, he added. According to media reports, after walking the entire night, the labourers had stopped to have tea at a roadside stall at 3.30 a.m., when a truck rammed into their DCM from behind. The truck was carrying limestone sacks and several labourers were asleep in it. The majority of the deceased were labourers sleeping in the truck. These repeated accidents have exposed the truth about the arrangements made by the UP government. This week alone, in Muzaffarpur, a UP Roadways bus had run over six labourers walking from Punjab to Bihar. Former UP Chief Minister Akhilesh Yadav said that these are not deaths due to accidents but murders. He has announced payment of Rs 1 each to all victims’ families.  He also said that the obdurate BJP government should take moral responsibility and pay Rs 10 lakh each to the families of the victims. Meanwhile, BSP supremo Mayawati has demanded action against officers responsible for these incidents. She said that labourers have lost their lives due to the irresponsible attitude of officers and action should be taken against those responsible. She also demanded that financial assistance be provided to the families of the victims. Watch the video story here:
TAGS Covid-19 coronavirus Lockdown Auraiya Akhilesh Yadav Murder Road Accident migrant labourers migrants migrant workers Indian Migrants