3 Killed In Police Firing As Violence Erupts In Bengaluru, 110 Arrested 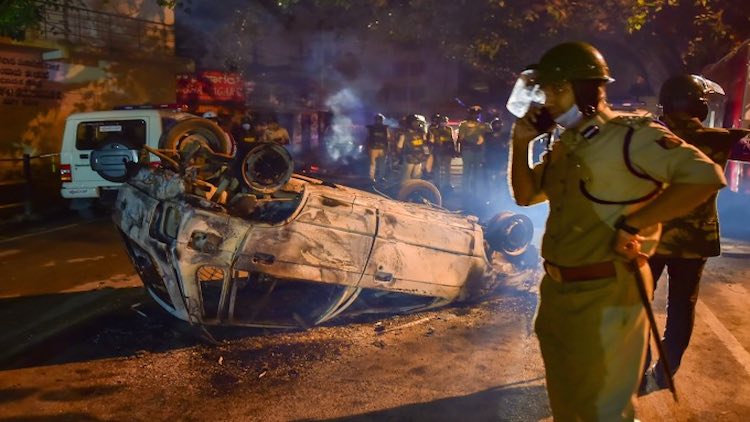 Violence erupted in Bengaluru over a controversial post on social media on Tuesday night, following which at least three people were killed in the police firing to control the mob violence, while 110 people have been arrested. DG Halli and KG Halli of East Bangalore are the most affected areas where the Bengaluru Police imposed curfew. Karnataka CM BS Yediyurappa has expressed confidence of strict action against the offenders. Also Read: UAE Extends Foreigners’ Visa And Work Permit For A Month, Big Relief For Indians

The person who allegedly posted the controversial post has been identified as Naveen, who is the nephew of Congress MLA Akhand Srinivas Murthy from Pulikeshi Nagar. Bangalore Police has arrested Naveen. Police commissioner Kamal Pant has appealed to all to cooperate with the police to maintain peace.

With regard to incidents in DJ Halli, accused Naveen arrested for posting derogatory posts.. also total 110 accused arrested for arson, stone pelting and assault on police. APPEAL TO ALL TO COOPERATE WITH POLICE TO MAINTAIN PEACE.

After Naveen's Facebook post, hundreds of people reached the police station and were demanding strict action against it. However, during this time the crowd went out of control, then a round of stone-pelting and arson started. Another mob reached outside the Congress MLA's house and burnt the vehicles there. According to media reports, dozens of vehicles were gutted in the violence. According to the Bangalore Police, three people died in the firing done to control the mob, while 60 policemen were also injured.

They vandalised MLA's house. N now seculars r silent abt it. Wow. These r d ones who cribbed over CAA. They will crib over NRC and UCC. It's high time bastards like them should be thrown outside the country. Enough v took this. #bangaloreriots pic.twitter.com/uFxyuRz3EL

Meanwhile, Congress MLA Srinivas Murthy has released a video requesting to maintain peace and assured that he is in favor of taking action against his nephew in this case.
TAGS Akhand Srinivas Murthy BS Yediyurappa Congress Leader Bengaluru violence bengaluru police Bengaluru