Union Petroleum Minister Hardeep Singh Puri has claimed that between April 2021 and March 2022, fuel prices in India have increased less than in the West. He claims that during this period the price of fuel in India has increased by 5%, while the western countries have seen an increase of 50%. The minister's claims are not wrong, but even a 5% increase in oil prices will affect India badly. Let's know - how?
Also Read:
UNSC Meet: Zelenskyy Says "Worst Crimes Since World War 2", Russia Responds

Due to the Russia-Ukraine war, fuel supply has been disrupted in the country and across the world and in such a situation the prices have increased globally. The Western and European countries have banned President Putin and industrialists, including several Russian oil companies. After this, some countries of the West have banned the purchase of oil from Russia. In such a situation, oil prices rose sharply in those countries. However, in the context of India - the central government bought 3 million barrels of oil from Russia at a cheaper price of $20-25. Apart from these, Russian Foreign Minister Sergey Lavrov, who recently visited India, offered to provide oil to the Indian government at a discount of at least $35. Amid sanctions, Russia has offered to provide at least 15 million barrels at huge discounts. According to media reports, these discounts will be applicable on the prices before the start of the war, due to which India can get oil at more cheap prices. Since the war, global crude oil prices have risen from $97 to $107. Meanwhile, despite the cheap prices, Indian has to pay higher prices on fuel. For example, petrol and diesel have become costlier by Rs 10 in 16 days. How fair is it to compare with the West? According to minister Hardeep Singh Puri, the prices of fuel in some countries of the West are higher than that of India, but compared to them, the income of the India is very less. The price of petrol in the UK is Rs 161.46 per liter and diesel at Rs 175.44 per liter but the GDP per capita of UK is $ 41,059 which is 21 times more than that of India. 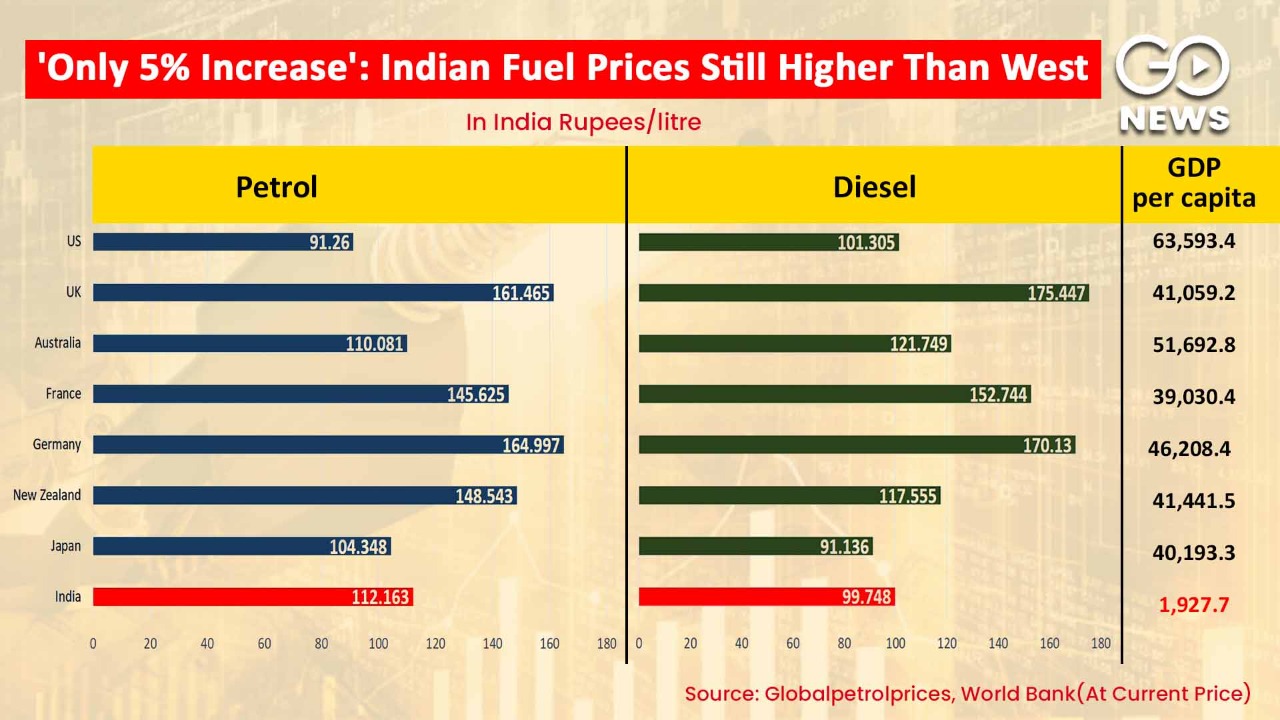 The prices of petrol and diesel in the US are lower than in India. Also, the GDP per capita of America is 33 times more than that of India at $ 63,593. India's earnings are decreasing and at the same time inflation is also at its peak. For example, petrol in the country is Rs 112 per liter and diesel is around Rs 100 per liter. The GDP per capita of India is only $ 1,927 which is less than that of the West, due to which inflation has a very bad effect on India. India imports oil from Russia Petroleum Minister Hardeep Singh Puri told the Rajya Sabha last week that in terms of volume, India bought about 4.19 million tonnes of crude oil from Russia in the first ten months of FY 2022, which was just 0.2 % of its total imports of 175.9 million tonnes. Apart from these, India imported 1.3% or 2.93 million tonnes of total imports in FY 2019-20 and 6.3 lakh tonnes or 0.3 % of the total imports in the FY 2020-21. The Petroleum Minister had told the Rajya Sabha that India consumes five million barrels per day and 60 per cent of it is imported from Gulf countries. Importing oil from Russia is a costly affair for India because of its transportation cost and meets about 85% of its crude oil requirement through imports.