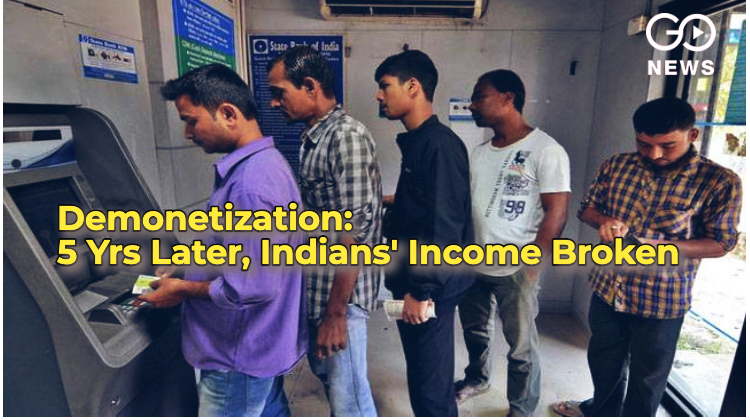 After 5 years of midnight demonetization of Rs 500 and Rs 1000 currency notes, Indians are still paying the price. The announcement made by the PM on 8th of November 2016 at 8 pm was like a death knell for the small businesses who depended heavily on the cash economy. Small industry showed signs of recovery in 2017-18 but again collapsed after the introduction of GST and its myriad compliances. For the 11 subsequent quarters manufacturing could not attain a double-digit growth, a must for the health of the industrial sector. A cursory look at Chart 1 shows how Industrial Production growth remained under 5% since demonetisation and even before the country was struck by the Covid Pandemic, industrial growth had gone into negative territory. The first quarter of this year shows a spike of 49% but all told the industry is still at the 2017 levels.
Also Read:
SKM, Samajwadi Party Call For Remembering Farmers On Diwali

 This has hit the income of Indian people cripplingly. Since 2016 Indians’ per capita income has increased only a little over 1% CAGR. While the government has been insisting that the economy has been improving and spending millions on advertising to force home the narrative, its own data shows that the per capita income is only 5.2% more than what it was in 2016. (Chart 2). This growth is wiped out when we compare it to the inflation, especially in food items. The hastily imposed lockdown worsened the incomes and hence, per capita consumption expenditure too is at the same level as 2017-18. Demonetisation was peddled as a panacea for financial ills in the country. We were promised that it will control corruption, restrict black economy, check counterfeit notes and even help in controlling terrorism. No significant achievements can be tabulated on all these grounds. India’s ranking on international corruption perception has not changed much. We still stand next to Burkina Faso. The only positive outcome of demonetization the government can claim is the surge in cashless transactions in the country which now count over 421 crore a month for a Rs 771444 cr . That is a measly Rs 1832 per transaction despite many transactions are now mandatorily piped through the government BHIM App. But who is complaining? Not the government who has spent millions on contractors to create the digital infrastructure or the contractors who now have a steady source of income and data. ( Chart 3) The biggest failure of demonetization has been to control cash transactions. Despite appeals from the Prime Minister himself and almost every department he presides over Indians still prefer cash over digital currency. The currency in circulation today is more than doubled since the demonetisation from 13.35 trillion rupees in financial year 2017 to over 28 trillion rupees as of March 2021! In any case Indians incomes – in digital or in cash- has been severely impaired by demonetisation misadventure.