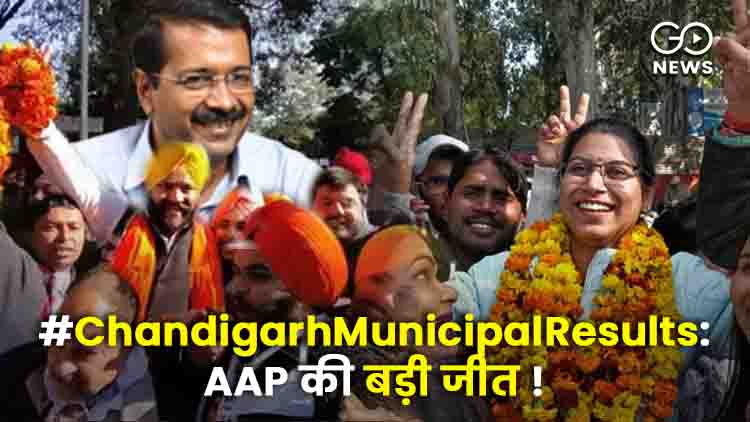 Aam Admi Party (AAP) has surprised its political rivals by clinching 14 ward seats of a total 35 in the Chandigarh Municipal Corporaiton Elections. Hailing it as “victory of Kejriwal’s model of governance", AAP MLA Raghav Chadha said that the people of Chandigarh has given a chance to his party, after 12 years of rule of both BJP and Congress in the Chandigarh Municipal Corporation.  AAP has emerged as the surprise frontrunner in the Chandigarh Municipal Corporation election, which took place on December 24. It has been said that approximately 60.7% voter turnout was recorded for the Chandigarh MC polls which concluded peacefully. Political biggies inlcuding BJP and Congress won 10 seats and 8 respectively. Shiromani Akali Dal managed to win only 1 seat in the civic polls. It has been reported, that although Congress did not win adequate number of ward seats, its vote share percentage has increased in this election.
Also Read:
Jack Ma's Alibaba Held Antfin Loses Over $1 Bn In India's Worst IPO

Upon the victory, Delhi Chief Minister and AAP Leader Arvind Kejrieal said that his party's performance in the civic poll is a sign of coming change in Punjab. In a tweet, he said, "This victory of Aam Aadmi Party in Chandigarh Municipal Corporation is a sign of the coming change in Punjab. People of Chandigarh have today rejected the corrupt politics and chose the honest politics of AAP." He congratulated the winning candidated and his party workers, and further stated in the tweet, that the state is ready for a change.  AAP leader Raghav Chadha, while addressing the media, said, "I thank the people of Chandigarh on behalf of AAP & Arvind Kejriwal to have given such love & trust to a small & honest party like ours, who contested elections here for the first time ever. Chandigarh is just a trailer, Punjab is the movie." A debutant party in the civic polls of Chandigarh, AAP is also eying the upcoming assembly electins in the state of Punjab. Meanwhile, what can be termed as a major set back for the BJP, mayor Ravi Kant Sharma and former mayor Davesh Moudgil were both defeated by AAP candidates. Although AAP has made a steller debut, its election campaign committee head Chander Mukhi Sharma, however, lost the polls.  In the last Chandigarh MC Polls, held on December 18, 2016, BJP swept the elections by winning a total of 20 out of the 26 seats. Congress managed to win mere 4 seats whereas Akali Dal won only 1. The scenario for Congress, however, was very different in 2011, when the party had won 11 seats, surpassing its political rival BJP which won 10 seats. In the 2011, municiapl elections in Chandigarh, both Akali Dal and BSP won two seats each 2.  The performance of political parties in the civic polls can be counted as a cruical factor in deciding a possible fate in the assembly elections. 7 stated in India are scheduled for assembly polls in the year 2022. Congress has been witnessing series of setbacks, with many-a-leaders exiting the party ahead of the scheduled polls. Earlier in November, former Chief Minister of Punjab and senior Congress leader Captain Amarinder Singh exited from Congress and resigned from his post. He later flaoted his own political party, Punjab Lok Congress to contest the state's assembly polls. Earlier in the day, Captain visited Union Home Minister Amit Shah's residence in New Delhi. While addressing the media, Punjab BJP in-charge Gajendra Singh Shekhawat, "Today the party chief of all the 3 parties BJP, Punjab Lok Congress & SAD (Sanyukt) headed by Dhindsa met. A committee consisting of 2 members from each party will be formed to discuss the issues like seat sharing, a joint manifesto."  The leaders, however, did not comment on the matter when asked about BJP's performance in the Chandigarh municicpal corporation election result. AAP has been eyeing for a majority in the state’s 117 seat Vidhan Sabha (Assembly). It's debutant performance can prove to be a key driving factor in creating a momentum for the party in other states as wellGiven the current volatile situtation in Punjab, political parties in the state are embroiled in word war. Last week, a bomb blast in Ludhiana Court killed two people. Prior to this, 2 incidents of sacrilige lynching took place in Amritsar and Kapurthala, which has not only added fule to a political fire but also sparked a tense environment in the state.