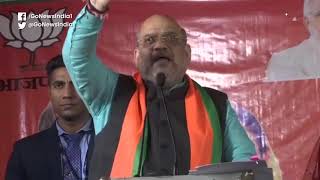 Two days after the results of the Delhi assembly election came in, Home Minister Amit Shah accepted on Thursday that some BJP leaders should not have given statements like ‘Desh ke gaddaron’ (the country’s traitors) and ‘India vs Pakistan’ during election campaigning. Shah said that the party suffered majorly because of these statements and had to face defeat in the Delhi assembly elections. He also said that the results of the Delhi election are not a mandate on the Citizenship Amendment Act (CAA) and National Register of Citizens (NRC). Shah said all this in a programme on an English news channel on Thursday. Also Read: Controversial FDA Claim Of No Evidence To Link Cellphones And Cancer

During the Delhi assembly election, BJP candidate Kapil Mishra had posted a tweet, in which he said that the scenario will be like an India-Pakistan match during voting on February 8. Also, during election campaigning in Delhi, Central minister and BJP leader Anurag Thakur had raised the slogan of ‘Goli maaro!’ (Shoot them!) at an election rally. Shah also accepted that his estimation of the Delhi election proved wrong and said that we don’t fight elections solely for defeat or victory. The BJP, which won just three seats in the last assembly election, could win only eight seats this time.  Meanwhile, Shah said that the BJP’s stand on the CAA is clear. He also said that he is ready to speak to anyone on this issue and whoever wants to discuss matters related to the CAA can take an appointment from his office. Shah blamed the Congress for dividing the country on the basis of religion.

Home Minister #AmitShah hinted that slogans like 'Goli Maro', 'India Vs Pakistan' and other hate speeches may have undone #BJP's prospects in the recently concluded #DelhiAssemblyElection2020 #DelhiResults pic.twitter.com/9Sq2u4M04W