Amnesty Accuses Delhi Police Of Being 'Complicit', 'Indulging' In Violence With Rioters 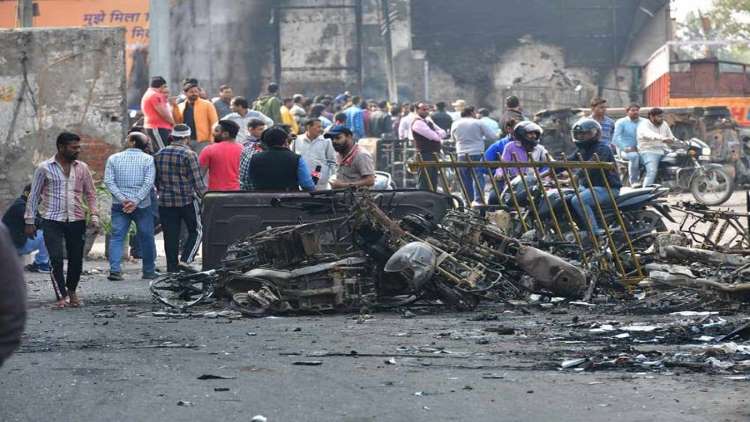 The Delhi police personnel were complicit and an active participant in the violence that took place in Delhi in February 2020, yet in the last six months not a single investigation has been opened into the human rights violations committed by the Delhi police - before, during and after the violence, said Amnesty International India on Friday as it released a new investigative briefing. The North-East Delhi riots between 23 and 29 February 2020 claimed the lives of more than 50 people, majority of whom were Muslims and injured more than 500.
Also Read:
SC's Decision To Conduct NEET, JEE Exams May Impact Over 30 Million Students

OUT NOW: With 50 testimonies & analysis of several verified user-generated videos, the new Amnesty International India investigation has documented a disturbing pattern of grave human rights violations committed by the Delhi police during the #DelhiRiots.https://t.co/edZcGFfWMk

“The first step towards ensuring justice for the survivors of the February Delhi riots is to end the impunity that prevents Delhi police from being held accountable. Six months on, there has not been even a single investigation into the role of the Delhi police. This ongoing state-sponsored impunity sends the message that law enforcement officials can commit grave human rights violations and evade accountability. That they are a law unto themselves,” said Avinash Kumar, Executive Director of Amnesty International India. Amnesty's investigative briefing documents the build-up to the riots, providing a timeline of police brutality in university campuses and the hateful speeches made by political leaders including the Bharatiya Janata Party (BJP) leader, Kapil Mishra in Delhi. It further documents the Delhi police's inadequate response in preventing the riots and its active participation in the violence.  In one of the several videos analysed by Amnesty International’s Crisis Evidence Lab, Delhi police officers can be seen kicking and hitting a group of five wounded men on 24 February, poking them with rifles and asking them to sing the Indian National Anthem. After the video was shot, the men were detained by the police. Amnesty International India analysed the video footage and spoke to the mother of 26-year-old Faizan, one of the men in the video. Kismatun, Faizan’s mother, told Amnesty International India that she had seen the video several times but did not realise until much later that her son was also there in the video. “I went to the police station along with my son’s photograph. I showed them his photograph and asked if he was there and they said yes. I asked them if they would let me see him and if they would let him go. The policeman said no. But I waited there till 1 o’clock in the night,” she said. Faizan was detained by the police for close to 36 hours without any charge. He was handed over to his mother after his condition deteriorated. The police refused to give any paperwork to the family to show that he had been detained.

The ruthless treatment of the heavily injured men by the Delhi police violates the international human rights standards that allow for force to be used only as a last resort, as much necessary to achieve the objective of such use and proportional to that objective. It also violates Article 9 of the International Covenant on Civil and Political Rights (ICCPR), to which India is a state party.

Delhi police also violated the domestic law by not following the due procedure as set out in Indian laws. In 1997, the Supreme Court of India in the case of D.K. Basu v. State of West Bengal also laid down a set of guidelines to prevent custodial abuse and torture that have since been incorporated in the Code of Criminal Procedure (CrPC). These guidelines and various sections of the CrPC call for the preparation of an arrest memo with the date and time of arrest signed by the arrested person and an independent witness. It also states that a family member should be informed of the person’s arrest along with their place of detention and that the arrested persons must be medically examined after being taken into custody. It also requires the police to produce every arrested person before a magistrate within 24 hours. Amnesty International India also analysed the role played by politicians who made hate speeches in the build-up to the riots. To illustrate, on 23 February, BJP leader Kapil Mishra, while leading a rally against the peaceful protests in Jaffrabad in North-East Delhi, gave the Delhi police a live-streamed three-day ultimatum to remove the protesters. His speech was immediately followed by widespread violence. However, none of the political leaders have been prosecuted so far.

Amnesty International India calls on the Ministry of Home Affairs to conduct a prompt, thorough, transparent, independent and impartial investigation into all allegations of human rights violations committed by @DelhiPolice.

The impunity must end NOW. pic.twitter.com/kPqSc7z5OG

“Amnesty International India calls on the Ministry of Home Affairs to conduct a prompt, thorough, transparent, independent and impartial investigation into all allegations of human rights violations committed by Delhi police and the hate speeches made by political leaders. Delhi has witnessed two major communal violence incidents across a period of four decades - the 2020 riots and the 1984 Sikh massacre. A common link between both the incidents is the human rights violations committed by the Delhi police. The repetition of such violations point towards a climate of impunity. This impunity sends the message to the politicians and police who advocate for violence in their speeches and fail to prevent the violence that follows that they can get away with committing such grave human rights violations. This impunity needs to and must end in order to bring justice to the victims and their family members,” said Avinash Kumar.