Arrests Under UAPA On The Rise; 75% Cases Have No Chargesheets: Centre

Arrests under the Unlawful Activities Prevention Act (UAPA) have been on the rise in the country but the chargesheeting has been poor. UAPA is the same law whose ‘unfair’ use by the present dispensation has put it under criticism by many human rights organisations. In the Lok Sabha, the Ministry of Home Affairs has informed that a total of 922 UAPA cases were registered across India in 2016, 901 in 2017 and 1,182 in 2018. 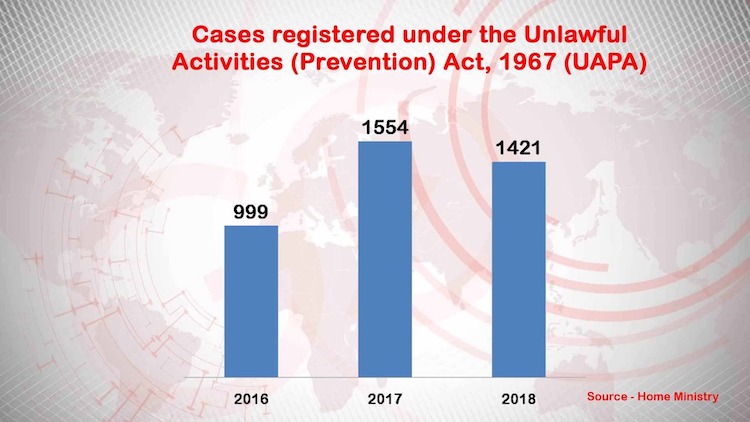 Citing the National Crime Records Bureau (NCRB) latest data, the Ministry said that 999 people were arrested under UAPA in 2016; the figure reached 1,421 in 2018. According to the data presented in the Lok Sabha, less than 25% of cases had chargesheets filed by the police so far. in 2016, chargesheets were filed in only 232 cases. In 2017 the figure stood at 272 and in 2018 it was 317. The question related to UAPA was asked by CPI Rajya Sabha MP Binoy Vishwam. Two Pinjra Tod activists Devangana Kalita and Natasha Narwal were arrested under UAPA for their alleged role in the Delhi riots and have been in jail since May this year. Recently, Delhi Police arrested JNU alumnus Umar Khalid under UAPA for his alleged role in Delhi riots. A Delhi court has sent him to 10-day police custody. Moreover, human rights activist Rona Wilson, Advocate Surendra Gadling, Professor Shoma Sen, Mahesh Raut, Sudha Bhardwaj among others are also in jail under UAPA in Bhima Koregaon violence case. An accused person charged under the provisions of UAPA cannot seek anticipatory bail and the period of investigation can be extended from 90 days up to 180 days at the request of the Government Counsel, which means that the accused will have no access to default bail. If the Court opines that prima facie the case is correct, it may also refuse to grant regular bail to the accused person.