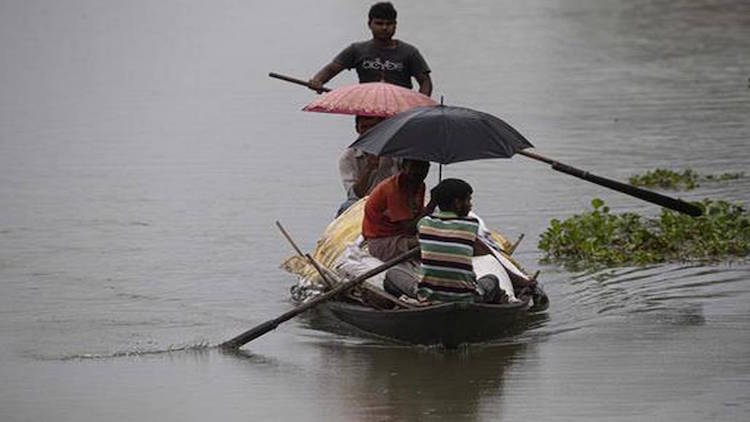 In the last 24 hours, six more people died in the northeastern state of Assam due to flooding. With this, the death toll due to floods and landslides in the State has mounted to 103 and over 5.4 million are affected. According to the Assam State Disaster Management Authority, six deaths occurred on Friday in Dhubri, Darrang, Bongaigaon, Goalpara and Kamrup districts. State government figures show that the total number of affected people has crossed 54 lakh due to the disaster.
Also Read:
Low Pollution During Lockdown In India Saved 630 Lives, Claims Study

Former Congress President Rahul Gandhi tweeted a video on the disaster, saying “the entire nation is with Assam. The people of Assam are facing this trouble with their courageous nature and they will overcome this disaster”. He also appealed to Congress workers to extend all possible help to those affected by the deluge. According to the State Disaster Management Authority, 5.51 lakh people are most-affected in Dhubri district. Whereas 5.29 lakh people have been affected in Barpeta, 4.27 lakh in Goalpara, 4.2 lakh in Morigaon and 2.25 lakh people in Dakshin Mamara. Apart from these, 3,363 villages are submerged in water and crops spread across 1.3 lakh hectares of land have been destroyed. At present, more than 38,000 flood-affected people have been shifted to 247 relief camps. In Guwahati, the Brahmaputra river is flowing one meter above the danger mark due to which water has entered the villages around the city.