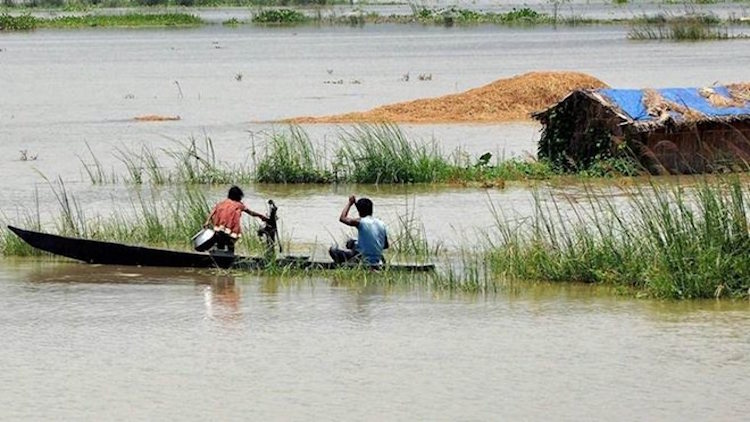 In the northeastern state of Assam, lakhs of people have been facing the onslaught of floods for almost a month now. According to the Assam State Disaster Management Authority report, more than 56 lakh 71 thousand people have been affected by the floods till now. Things have gone from bad to worse in Goalpara, Barpeta, Dhubri, South Salmara and Kamrup. However, the floodwaters have started receding and according to the bulletin of July 27, 22 lakh 34 thousand people are still affected by the floods in 22 districts across the state.

Last year too, there was a similar catastrophe in Assam. According to the Home Ministry, last year, floods in Assam caused havoc in 32 districts. During this period 101 people were killed while 5 lakh 35 thousand people had to take shelter in 1,357 relief camps. Statistics show that the floods in Assam this year are more devastating than the last year. So far, 103 have been swamped while 26 have been killed by the landslides.

Human life gets lost and affected due to floods in Assam year after year. Farmers also have to bear heavy losses. According to the Assam government’s bulletin of 27 July 2020, crops spanning across 258,312 hectares have been destroyed so far this year, whereas, in 2019, more than 1,63,000 hectares of crops were destroyed in the floods.

So far this year, 615 relief camps have been set up to feed the homeless people. According to the latest report, 259 relief camps are still running in 22 districts and about 46,000 people are being provided with food and drink. Whereas in 2019, 1,357 relief camps were built where 5 lakh 35 thousand people took shelter.

It is clear from these figures that the central and state governments have neither learned nor prepared from the floods that occurred last year, due to which there is a significant loss of life and property due to inundation.