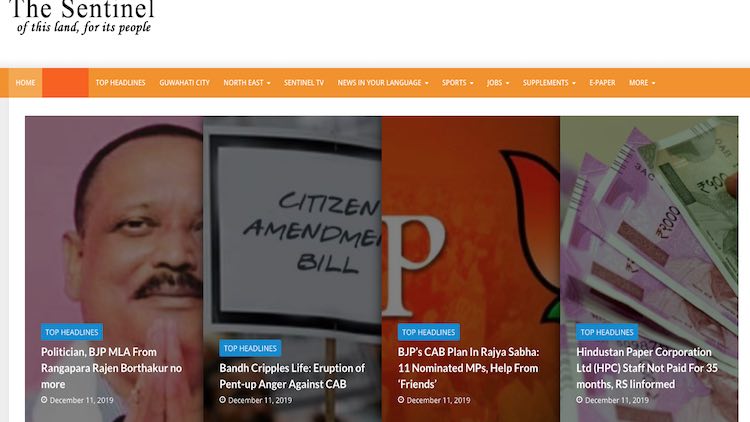 Various news websites of Assam are in blind zone after a ban on mobile internet services was imposed in the state in the wake of violent protests over the Citizenship (Amendment) Bill. Curfew has also been imposed in Guwahati and Dibrugarh. Websites like The Assam Tribune, The Sentinel, North-East Today and Dainik Janmabhoomi have no updates since the evening of 11th December. Also Read: Netflix To Launch New Plans Soon

On December 11, the last news was seen on The Assam Tribune's website, which stated that “curfew has been imposed for an indefinite period in Guwahati from 6.15 pm today and two columns of Army has been deployed for flag march after fresh and volatile protests erupted across the State, including at the all-important GS Road in Guwahati which saw a ‘war zone’ like atmosphere as the protesters virtually laid siege to the Janata Bhawan.” The Assam Tribune has its head office in Guwahati.

On the website of The Sentinel, the last update was of December 11 at 9 am, which gave the news of the death of the BJP MLA. The second news was published at 8:55 am which stated that a bandh was called for 11 hours in Assam. Usually, when a shutdown is announced, people sit in small gatherings or play cricket. But during the bandh, according to The Sentinel, all the people protested against the Central Government over the CAB. The Sentinel is headquartered in Guwahati. The last news published on the website of North-East Today was on December 11 at 4:08 pm, which reported that the center is removing forces from Jammu and Kashmir and deployment is being done in Assam. North-East Today's head office is located in Guwahati, Noida and Mumbai.

Moreover, an Assamese online newspaper called Dainik Janmabhoomi had its last news update on December 11. Internet services are also shut down in Tripura along with Assam. Two railway stations have been set on fire. Police have lathi-charged the protesters and clashes between police and protesters have taken place in many places. The Citizenship Amendment Bill has been approved by both Houses of Parliament. The Bill will become law after the President's assent, under which there is a provision to grant citizenship to non-Muslims from Pakistan, Afghanistan and Bangladesh and refugees from these countries who came to India before 31 December 2014 will be given citizenship.
TAGS Citizenship Amendment Bill Dainik Janmabhoomi North-East Today The Sentinel The Assam Tribune internet shutdown assam news websites