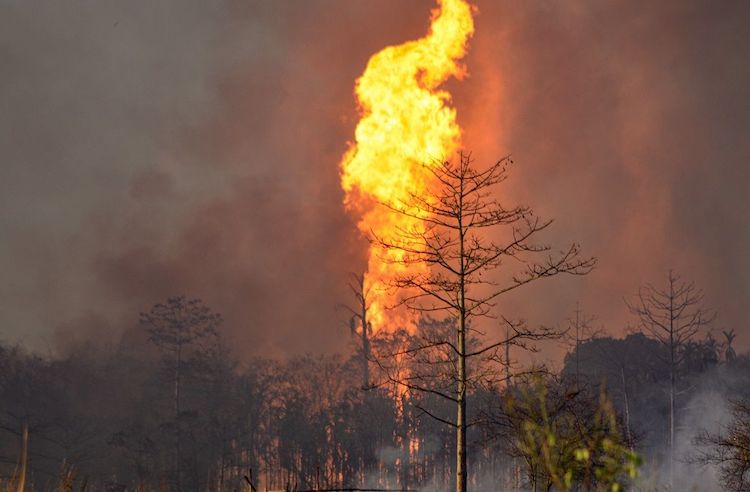 Three foreign experts were injured in a massive explosion in an oil well in the Baghjan oil field of the Tinsukia district of Assam. All three have been admitted to the hospital. Oil India Limited spokesperson Tridip Hazarika said that the blast occurred while extinguishing the fire that was already underway. The leak in the oil well of Oil India Limited started on 27 May and a fire broke out on 9 June. But even after 56 days, it could not be pacified. So far, two firefighters have been killed in the fire extinguishing operation and now foreign experts have also been injured. Also Read: Bicycle Production Down by 50% Due to Labour Shortage

After a fire broke out on June 9, foreign experts were called from few countries including Singapore. It was being said that the campaign would end by July 7, but due to heavy rains and floods, it had to be stopped. Due to the floods, roads and bridges around the oilfield were broken, which stopped the fire extinguishing work. There are 17 oil wells and five gas wells in the Baghjan oil field. It is between the Maguri-Motapung Wetland and Dibru Saikhowa Reserve. There is a habitat of hundreds of endangered animals in the area, but due to an almost 2 months long-burning fire, there is a huge loss in the area. According to an estimate, 9,000 people of Tinsukia and Dumduma Circle have been displaced by the fire. Last month, the National Green Tribunal formed a committee consisting of eight members to find out the cause of the fire. The committee will also try to know how much damage has been done to human life, animals, and the environment.
TAGS Tinsukia Blast Baghjan Oil Field oil field fire Assam