Amazon CEO Jeff Bezos has announced big plans for investment and a manufacturing boost in India. But can Bezos make an inroad given a conflict of interest with his ownership of The Washington Post, which has firecely criticised the Indian government over its Citizenship law and what it has called 'a new low for a democracy'? On the other hand, can the Centre afford to let go of much needed investment? Not likely, as can be gauged from the Commerce Ministry's changing stance towards the Bezos Behemoth. Despite the economic downturn in the country, the government is making statements against foreign investors, due to which the business world is rife with worries.
Also Read:
Households Running On Credit Cards

After authorities launched a probe against Amazon through the Competition Commission of India (CCI), Commerce Minister Piyush Goyal found himself in a tight spot a day after scoffing at Amazon founder and CEO Jeff Bezos’s promise of investment worth Rs 7,000 crore in India.  On an India tour, Bezos had said: "We’re committed to being a long-term partner of India. And actions speak louder than words... Over the next five years, Amazon will invest an incremental US $1 billion to digitize micro and small businesses in cities, towns, and villages across India, helping them reach more customers than ever before. This initiative will use Amazon’s global footprint to create US$10 billion in India exports by 2025'. Goyal had at a conference in New Delhi on Thursday shot back by saying that “They may have put in a billion dollars but then if they make a loss of a billion dollars every year then they jolly well have to finance that billion dollars.. “So it’s not as if they are doing a great favour to India when they invest a billion dollars.” Goyal had said the company hadn’t done any big favors by announcing a billion-dollar investment. The Minister made the remarks even as the Competition Commission's inquiry was underway. However, on Friday, Goyal sought to backtrack on his remarks and told reporters in Ahmedabad that his statement regarding Amazon was misconstrued and that the government welcomed all investments provided they stayed within the ambit of rules and regulations.   When the world's most wealthy man reaches the fifth largest market in the world, people stand in line and big movie stars welcome him during his three-day visit to India. It is of note, however, that neither Prime Minister Modi nor Commerce Minister Piyush Goyal met Bezos. Analysts believe that the Indian government's displeasure with Amazon is not business-related, but it stems from the reporting of the country on the pages of Jeff Bezos' newspaper The Washington Post. On December 24, 2019, The Post published an article titled "The world's largest democracy is pushing back. Modi should listen." in an open criticism of the Citizenship Amendment Act. 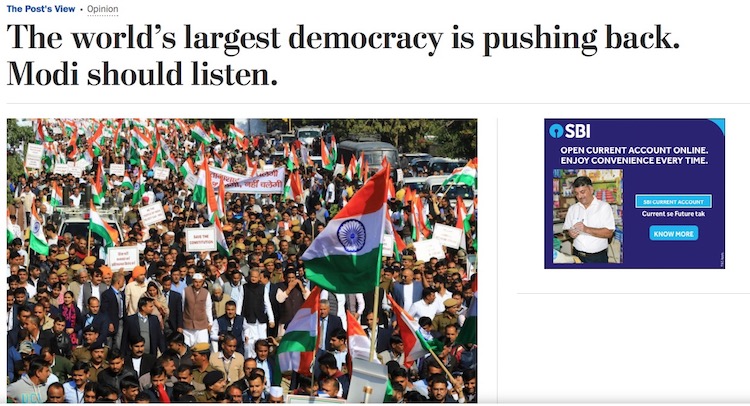 In another editorial published on December 20, 2019, titled "India marks a new low for a democracy" which criticised the Modi government for Kashmir restrictions.

It remains to be seen what overall attitude the government will take towards foreign investors in spite of the editorial stance of Bezos' Washington Post, if it wishes in some degree to stem the economic slowdown.

While the #economy flounders, the #government is doing no favours to #investment as was evident in the #CommerceMinister's jibe at the @Amazon CEO @JeffBezos' announcement to invest $1 billion in India@RaGa_reports#indianeconomy @PiyushGoyal