Bihar: Bridge Constructed 29 Days Ago at a Cost of Rs 264 Crore Damaged by Flood 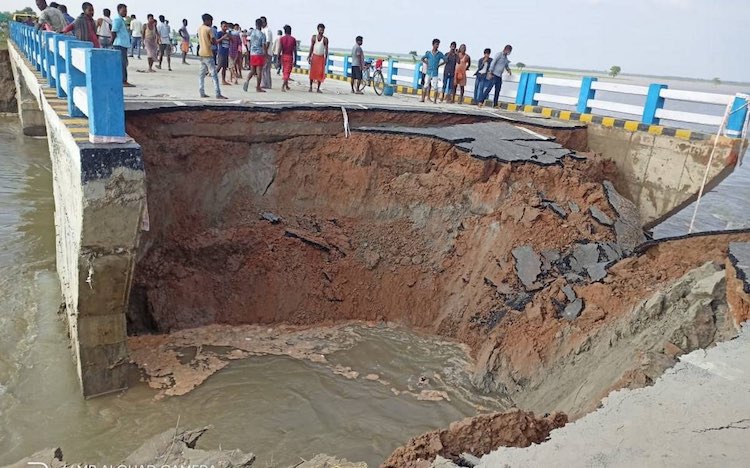 In Gopalganj, Bihar, part of Sattarghat Mahasetu, which was completed 29 days ago at a cost of Rs 264 crore, was washed away by the flood. The bridge was inaugurated by the state Chief Minister Nitish Kumar on June 16, but a part of the bridge was washed away by floods during the early monsoon. Due to the breakdown of this bridge, the link between Gopalganj to Champaran and Muzaffarpur district has been broken. Tejashwi Yadav, leader of the state's main opposition party RJD, attacked CM Nitish Kumar after the bridge incident. He asked, "Did the Chief Minister inaugurate the bridge ahead of time for his speech?" Our demand is that the Government of Bihar should immediately blacklist the Vashishta company that built the bridge.

It is being told that more than three lakh cusecs of water was flowing in Gopalganj on Wednesday. Due to the pressure of such a huge water level in the Gandak river, the Mahasetu broke. This bridge built on the Gandak river was constructed by the Bihar Bridge Construction Department, whose foundation was laid in the year 2012, but this bridge, which was completed in eight years, could not last even 30 days.

Bihar Road Construction Minister Nand Kishore Yadav said while clarifying, ‘There is no damage to any bridge. Just a minor bridge slab has collapsed. This approach slab is two kilometers away from the Sattarghat bridge.'

The approach slab that has collapsed is 2 km away from main Sattarghat Bridge; no damages have been caused to any bridge. Just the approach slab of a minor bridge has collapsed: Nand Kishore Yadav, Bihar Road Construction Minister https://t.co/yub8TCCtZH pic.twitter.com/dAQQNeFCza