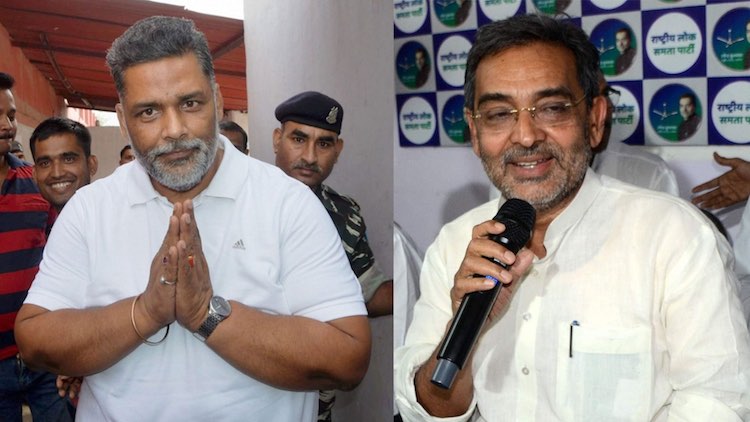 Whereas the PDA includes Pappu Yadav's Jan Adhikar Party, Chandrashekhar Azad's Azad Samaj Party, MK Faizi's Social Democratic Party and VL Mathang's Bahujan Mukti Party. The PDA has declared Pappu Yadav as the chief ministerial candidate, who accused CM Nitish Kumar of not doing enough to fight the COVID-19 pandemic Nitish has got addicted to power instead of serving the state, Yadav said. However, these new fronts have been created by leaders who did not agree with seat-sharing with the Grand Alliance or the NDA alliance. For example, RLSP chief Upendra Kushwaha had demanded 30 seats from RJD in the grand alliance, while sources say that he was offered five seats only. At the same time, Upendra Kushwaha was also trying to negotiate with BJP on seat sharing. A senior BJP leader even said that Upendra Kushwaha had asked for eight seats from the BJP. Similarly, the Jan Adhikari party chief Pappu Yadav wanted to contest elections with the grand alliance but after Tejashwi Yadav's refusal, he had to form a coalition front of his own. However, experts say that the ‘Yadavs’ of Bihar will never accept Pappu Yadav as an alternative to Tejashwi Yadav. Similarly, the ‘Kuswahas’ of Bihar cannot accept Upendra Kushwaha as an alternative to Nitish Kumar. Experts say that any third front is limited to the election only and this front will also end post-election. In the last election, the party of PDA CM candidate Pappu Yadav got only 1.35% votes while UDSA CM candidate Upendra Kushwaha's party got 2.6% votes. However, Upendra Kushwaha then contested with the NDA alliance.