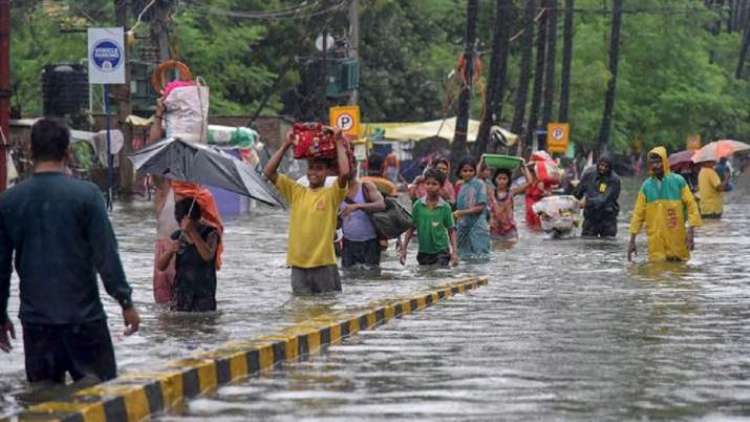 After the devastation in the northeastern states of Assam and Meghalaya, daily life in Bihar has now been hit by floods. In the last four days, there have been 11 deaths across 10 districts in the state due to floods. Due to the increasing water pressure, dams have also been damaged in many districts and so far five lakh people have been affected. According to the data, three people each died in West Champaran and Sitamarhi, two in Sheohar, one each in Madhubani, Darbhanga, and Supaul. According to Bihar’s Disaster Management Department, more than 13,000 people have been rescued so far.
Also Read:
Relief For Sachin Pilot: SC Refuses Stay On Proceedings in Rajasthan High Court

According to the Disaster Management Department, the ten districts which are most prone to floods include Sitamarhi, Sheohar, Supaul, Kishanganj, Darbhanga, Muzaffarpur, Gopalganj, East Champaran, West Champaran and Khagaria districts. According to Vijay Sinha, Commandant of 9th Battalion of NDRF, 21 teams of NDRF have been deployed in 12 districts in the state. According to the Minister of Water Resources in the Bihar government, the Mahananda River in Kishanganj and Purnea, the old Gandak River in Muzaffarpur and Samastipur, the Bagmati River Sitamarhi, Muzaffarpur and Darbhanga, the Kamla Balan River in Madhubani, the Lalbakia River in East Champaran, the Adhwara River in Sitamarhi, the Khiroi river is flowing above the danger mark in Darbhanga district. Leader of the Opposition in Bihar Legislative Assembly Tejashwi Yadav has attacked the Nitish government after visiting the flood-affected areas of Darbhanga and Madhubani districts. He tweeted- ‘39 Lok Sabha MPs of NDA are missing from areas. None of the ministers in charge of the government went to the respective districts. The entire cabinet is absent. The water resources minister has no idea neither does the health and disaster management minister. We are helping all possible victims and the needy.’

Apart from Bihar, two more people died due to floods in Assam on Wednesday. These deaths occurred in Barpeta and Morigaon, after which the total death toll in the state has risen to 125. According to the state government, the number of people affected by the flood has reached above 72 lakh.