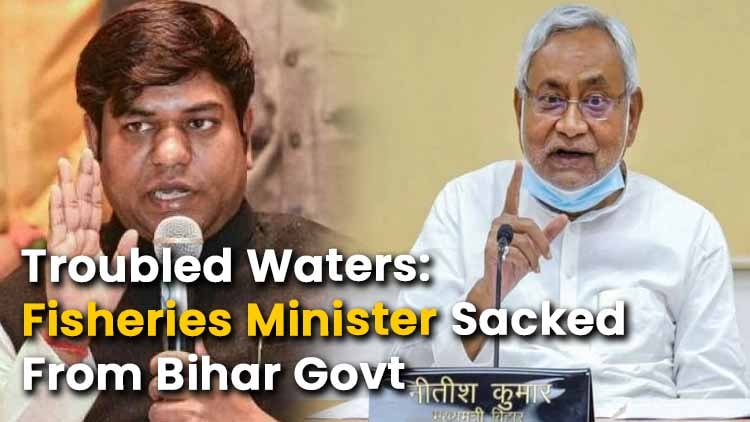 Bihar Chief Minister Nitish Kumar on Sunday dismissed the Minister of Animal Husbandry & Fisheries, Mukesh Sahni, from his cabinet, by writing to the Governor that Sahni is “no longer a part of the NDA”. The state's Information and Public Relations Department confirmed this on its official WhatsApp group which states, “After the BJP requested to dismiss Mukesh Sahni as a minister, the CM has recommended it to the Raj Bhavan”. In its letter to the CM, BJP said that ‘since Sahni is no longer a part of NDA, he should be sacked from the post of minister'.
Also Read:
India Looking At Sanctions Impact On Economy As US Presses For Stronger Russia Stance

In the 2020 Bihar elections, the BJP had given 11 seats to ‘VIPs’ from its NDA quota. These VIPs contested from these seats and won four seats. The three VIP MLAs were unofficially BJP supporters from the very beginning. Mukesh Sahni also lost his election but was a part of the coalition so he was made a member of the Legislative Council and was given the Ministry of Animal Husbandry & Fisheries. On Sunday, ahead of his removal, Bihar BJP chief Sanjay Jaiswal alleged that Sahni had passed an order that distorted the organizational structure of a registered society, Matsyajeevi Sahyog Samiti, by which the fishing community was negatively impacted. Jaiswal alleged that Sawhney, as a minister, removed the posts of ministers in the cooperative society and formed an executive body, which has been under the control of a bureaucrat. In the new order, there is also a provision for making online members of the fishermen who elect the block level cooperative society. But the new order does not define who the "fishermen" are. Mukesh Sahni had recently said that joining NDA was a 'mistake' for him. After this, three MLAs of his party left the party and joined the BJP. These include Raju Kumar Singh (Sahebganj), Mishri Lal Yadav (Alinagar) and Swaran Singh (Gaura Bauram). Let us tell you that Sahni is the founder head of Vikassheel Insan Party, who left the RJD alliance and joined the NDA in the 2020 assembly elections. After three VIP MLAs joined BJP, it has become the single largest party in the assembly. BJP had won 77 seats in the election and now they have 80 MLAs and JDU has 45 MLAs. In such a situation, this move of VIP MLAs can create problems for Nitish Kumar. NDA has the support of a total of 127 MLAs in the Bihar Legislative Assembly. While the opposition RJD alliance has 91 and Congress, which is no longer a part of the RJD alliance, has 19 and five MLAs from the AIMIM.