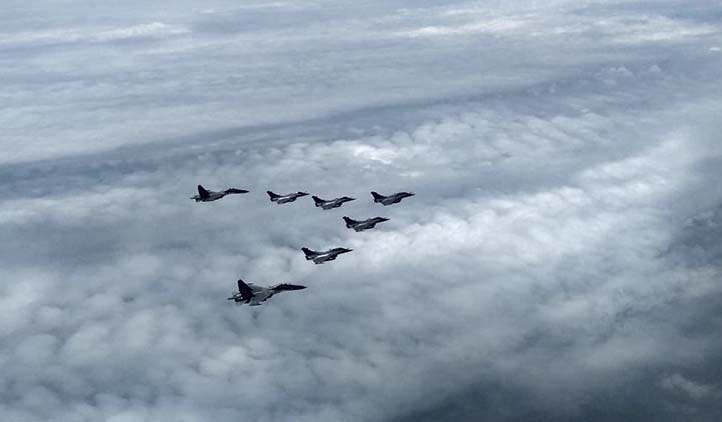 The first batch of five Indian Air Force Rafale fighter jets have touched down at the Air Force Station Ambala.

The Touchdown of Rafale at Ambala. pic.twitter.com/e3OFQa1bZY

Also Read:
Three-Year-Old Raped By Uncle In UP, Condition Critical

The combat aircraft were received by Air Chief Marshal RKS Bhadauria early on Wednesday afternoon. Upon entering Indian airspace, the Rafales were escorted by 2 Sukhois.

They covered a distance of 7,000 kilometres after taking off from France with a refuelling stop at Al Dhafra in the UAE.

The five Rafales escorted by 02 SU30 MKIs as they enter the Indian air space.@IAF_MCC pic.twitter.com/djpt16OqVd

The final induction ceremony will take place in second half of August 20 wherein full media coverage would be planned, the IAF said.

The multirole role combat jet will boost IAF capabilities in the region. IAF aircrew and ground crew have undergone comprehensive training on the aircraft, including its highly advanced weapons systems and are fully operational now. Post arrival, efforts will focus on operationalisation of the aircraft at the earliest, the IAF stated. The Rafale jets are armed with Meteor ‘beyond visual range’ air-to-air missiles and Mica multi-mission air-to-air missiles along with the highly advanced active electronically scanned array (AESA) radar.

Section 144 had been imposed in four surrounding villages near the Ambala air base prior to the arrival of the Rafales. “The planes are outstanding, Indian technicians and pilots marvelously completed their training in France. They are totally capable to use these planes at their best,” Emmanuel Lenain, French Ambassador to India said.

The deal for 36 Rafale fighter aircraft was inked with Dassault Aviation in 2016 for an estimated Rs 59,000 crore