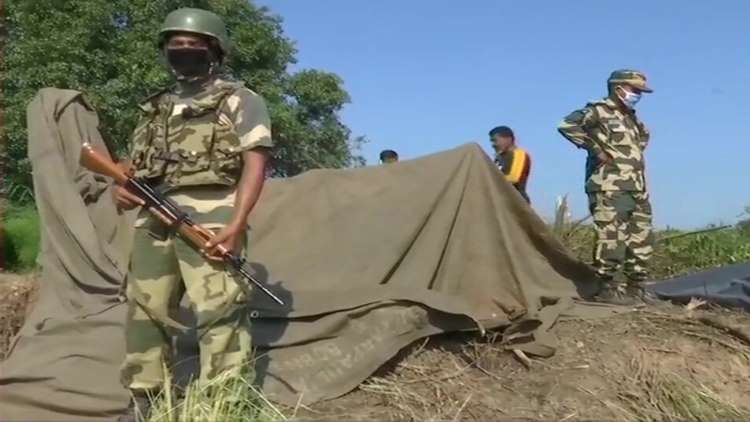 The Border Security Force has hit a huge success as it detected an underground tunnel near the international border in Jammu and Kashmir’s Samba. The tunnel is about 25 fit deep and 150-metre starts from the Pakistani border and reaches the Indian border. BSF has got some sandbags from this tunnel, which has Shakargarh and Karachi written on it. Jammu BSF IG NS Jamwal said that this tunnel has been dug with complete preparation, which is not possible without the help of engineers.
Also Read:
Flood Fury: 12 Dead In Odisha, 30 Houses Collapse In Jammu

The BSF said that on the other side of the international border, the nearest post of Pakistani Rangers is 400 meters away, where the tunnel has been found in Samba. After finding the tunnel, BSF has started a large-scale search operation so that if more such tunnels are present that aid infiltration.

The sandbags have proper markings of Pakistan, which clearly shows that it was dug with proper planning & engineering efforts. Without the concurrence & approval of Pakistani Rangers & other agencies, such a big tunnel cannot be built: Jammu BSF IG NS Jamwal https://t.co/Vq2UUqqLa8 pic.twitter.com/NVNf2i4JmO

However, this is not the first time that a tunnel has been found along the Line of Control with Jammu and Kashmir. Statistics show that in the last 10 years, about half a dozen tunnels have been found. In 2012, the BSF had detected a 400-metre long tunnel in Samba sector and another tunnel was found in Palanwala sector near LOC in 2014. Same year, another tunnel was detected in Chillyari area of Samba. The] tunnel was dug up to 25 meters within the Indian border and the rest is in Pakistani territory. In March 2016, a long tunnel was found in RS Pura sector which was carved into the Indian side for 30 meters.