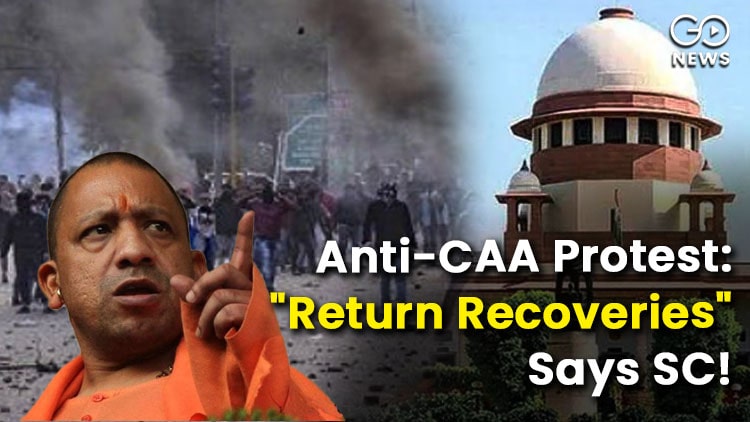 The Supreme Court has directed the Yogi government of Uttar Pradesh to recover crores of rupees from CAA protesters and refund them. The court reached this judgment after the Yogi government informed the court that it had withdrawn 274 recovery notices that had been issued.
"How can the attachment be allowed to proceed if the attachment is against the law and the orders are withdrawn?" the court asked. The UP government issued recovery notices to the protestors in December 2019 and reportedly recovered money.
Also Read:
LIC IPO Data Confirms Massive Death Numbers in 2021; Bad Health of the Insurer

The Advocate General for Uttar Pradesh, on the other hand, urged the Supreme Court not to issue the return order. "It will prove that the entire process done by the administration was illegitimate," the Advocate General added if the Court issues such an order.
The UP administration was reprimanded by the Supreme Court on February 11 for acting on the recovery letters issued to the protestors and was given one last chance to withdraw the notifications. If the government does not retract its notice, the court will stay its decision for violating the law, according to the court.   The state government, however, has the legal authority to take action against the protesters under the 'Uttar Pradesh Recovery of Damage to Public and Private Property Act,' which was passed by ordinance in August 2020.
At addition, Justices D.Y. Chandrachud and Surya Kant refused to accept the UP government's request for an exemption to oppose Advocate General Garima Prasad's case in the tribunal, and ordered a straight reimbursement. Such letters were also given to individuals who had already died, according to the petition. Similar warnings were reportedly issued to a 90-year-old man. Pervez Arif filed a petition in this case, asking the court to order the cancellation of all recovery notifications allegedly given to the protesters. CM Yogi's Vengeance! On December 21, 2019, the government issued an order to seize the suspected protesters' property.
In retaliation, Chief Minister Yogi Adityanath announced on December 19, 2019, that those responsible for the violence will have to pay for the damage to public property. "We'll attach their properties," he said, adding that "several faces have been identified through video evidence." Millions of notices but unclear! According to the English daily Indian Express, the UP government issued 500 notices in ten districts in order to recover Rs 3.35 crore. The Additional District Magistrate issued this notice, in which 46 letters were addressed to the Hazratganj region of Lucknow, each with a recovery notice of Rs 64.37 lakh.
Compensation for damage to roads and vehicles: Rs.8,80,000 for four government buses, Rs.10,000 for a private car; and three government officials' private motorcycles were given recovery letters for Rs 98,000 each. However, no information was provided in the notification as to how it was prepared. IPC sections 146 (rioting), 186 (obstructing a public official), 152 (using criminal force to impede public authorities from fulfilling their duties) and CrPC sections 46 (damage to public property) are all applicable. In addition to violating the 144 curfew, he was additionally charged with violating the confinement rules. “Name And Shame” Hoarding! Not only that, but the UP government had also placed "Name and Shame" hoardings in Lucknow, the state capital, on which the protestors' images and addresses were purportedly written. The names, photos, and addresses of 50 persons were allegedly posted on the UP government's hoardings, which garnered significant condemnation.
The Chief Justice of the Allahabad High Court, Justice Govind Mathur, had taken suo motu cognizance of the matter and ordered the UP government to remove the hoardings in favour of the protesters as a 'right to privacy' in an order dated March 9.