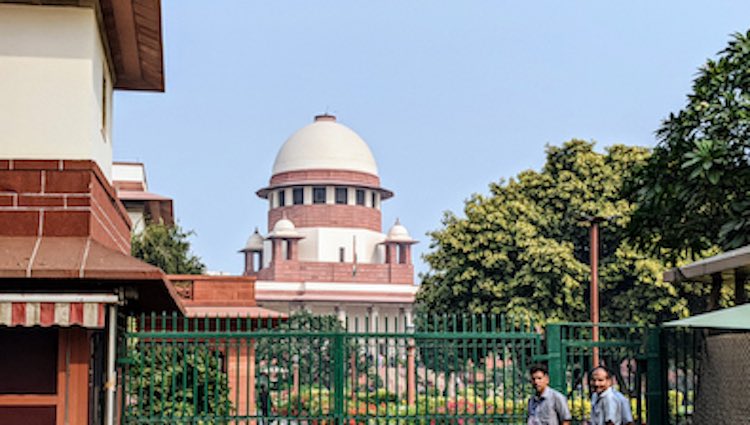 The Supreme Court on Wednesday issued a notice to the Centre on the contentious Citizenship Act which makes religion a basis for Indian citizenship. A three-member bench of Chief Justice SA Bobde, Justice BR Gavai and Justice Suryakant issued this notice while hearing a batch of 59 petitions challenging the constitutional the validity of the CAA. Also Read: Kashmir’s Forests Face The Axe

In the next hearing on January 22, the Supreme Court will decide whether the amendment to the Citizenship Law is valid or illegal.  It has been argued that the legislation is unconstitutional and an attack on the secular structure of India and violates the secular values ​​enshrined in the Constitution. The petitioners also demanded that the implementation of the CAA be stayed, which the apex court refused to comply with.

A Bench of Chief Justice SA Bobde, Justice BR Gavai and Justice Surya Kant refuses to stay the implementation of the Citizenship (Amendment) Act, 2019. Supreme Court says it will hear the pleas in January. pic.twitter.com/U4Up0yh7T9

Earlier on Tuesday, the Supreme Court refused to appoint any judicial committee to probe student-related violence on the Jamia and AMU campuses on Sunday.  The top court held that High Courts were free to appoint retired SC or HC judges to head any such panel. " We find that a committee be appointed to go into matters of various states on collection of evidence. We consider appropriate that petitioner be directed to approach HC within the jurisdiction of incidents", the Apex court stated.

The #SupremeCourt has refused to appoint any judicial committee to probe student-related violence on the #Jamia and #AMU campuses on Sunday. The top court held that High Courts were free to appoint retired SC or HC judges to head any such panel. @SidharthPandey reports pic.twitter.com/k6bkR9wAxO

Opposition by political parties over the Central government-controlled Delhi Police's action against Jamia students on Sunday is rife.

Congress leaders led by Priyanka Gandhi had on Monday held a dharna at Delhi's India Gate to express solidarity with protesting students against the Citizenship Act. Mamata Banerjee said that more and more chief ministers are coming forward and opposing the NRC. The chief minister appealed to her counterparts from other states to join her in opposing the Citizenship Act as well. She further appealed people to not to resort violence during protests. A National Human Rights Commission inquiry has also been initiated in the case.  Ahead of Tuesday's SC hearing, CJI Justice Bobde had cautioned students saying "just because they are students, they can't take law in their own hands". The protests against Jamia violence have also spread to other varsities in the country including AMU, BHU and Jadavpur University. In the NHRC complaint, the Delhi Police has been accused of entering and vandalising the buildings on Jamia campus and attacking the students.
TAGS Supreme Court Citizenship Act indian citizenship Citizenship Amendment Act 2019 jamia violence Jamia Students Protest Jamia Millia Islamia