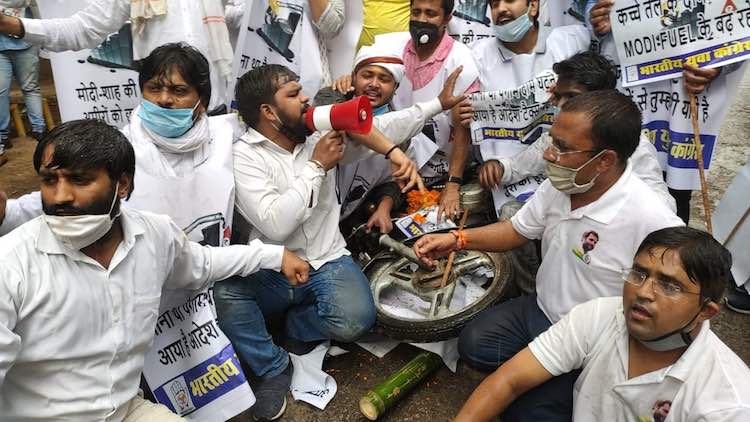 The Congress Party has raised a hue over the continued hike in the prices of petrol and diesel for 18 days. In all parts of the country, the Party workers have staged protests, demanding rollback of the increased prices. Also Read: Recent Advances in AI Increasing Risk of Nuclear Weapon Use-New SIPRI Report

With the increase of Coronavirus infections across the country, the prices of petrol and diesel are also increasing continuously. Meanwhile, in Bhopal, Congress party leaders protested by taking out a cycle march towards the MP CM Shivraj Singh Chouhan’s residence. Senior party leader Digvijay Singh, who partook in the protest, said, "Today when the people are plagued by the Coronavirus crisis, inflation is increasing, people are starving. Meanwhile, the Central Government has increased the excise duty for the 18th consecutive day. As Modi ji says - opportunity from crisis, then this is an opportunity for them to earn money in the time of crisis.' In the national capital Delhi as well, workers of NSUI and Youth Congress are continuously demonstrating. During this, Congress workers also raised slogans of 'Surrender Modi Murdabad'.

Workers protested in front of the party headquarters with posters saying 'BJP's plunder continues, rich people are your friends’. At the same time, the Hyderabad police have detained activists protesting against the fuel hike. For the last 18 days, the prices of petrol and diesel continue to increase. Till now, diesel has become expensive by Rs 10.48 per litre and petrol by Rs 8.50 per litre.
TAGS Delhi NSUI Protest Petrol-Diesel Price fuel price hike Rising Fuel Prices congress workers Congress Leader Congress