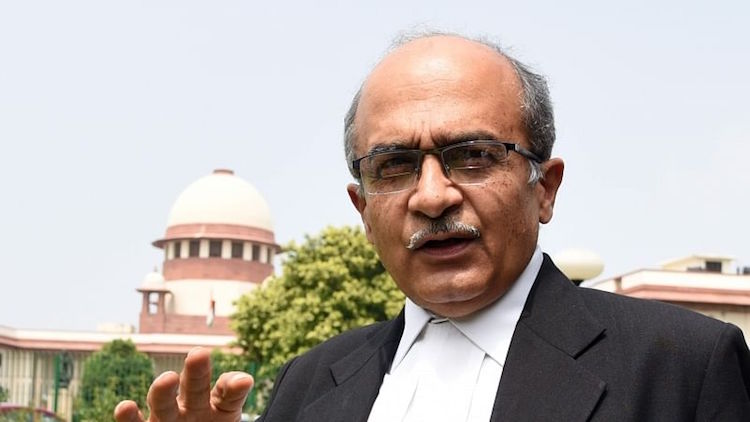 The Supreme Court on Monday imposed a fine of Rs 1 on activist-lawyer Prashant Bhushan after it found him guilty of ‘contempt of court’ on August 14. The top court has asked Bhushan to pay the fine by September 15, failing which he will have to undergo a jail term of 3 months and will also be barred from practising law for three years. The maximum penalty for contempt of court is a six-month jail term and a fine of Rs 2000. The sentence was pronounced by a three-judge bench headed by Justice Arun Mishra and which includes Justices B.R. Gavai and Krishna Murari. Observing that “the court’s decisions can't be influenced by the publications or opinions in the media”, the SC held that ‘Bhushan’s statements to the press even before they were considered by this court was to influence the proceedings’.
Also Read:
Fresh Clashes In Eastern Ladakh As India, China Troops Lock Horns At Pangong Tso

The court had initiated contempt proceedings against Bhushan on July 21 following his two tweets in June. Bhushan had tweeted about four former Chief Justices of the Supreme Court and another tweet which included a picture of the current Chief Justice Sharad Arvind Bobde riding a Harley Davidson motorcycle. Bhushan’s tweet also mentioned that Justice Bobde was not wearing a helmet, but later apologised for his tweet informing the court that he did not notice that the motorbike was stationary. Bhushan, however, stood by his tweet about the former Chief Justices and in a supplementary statement, last week informed the apex court that he was only offering ‘constructive criticism’ and that he held the institution in the highest regard. Last week, Attorney General of India KK Venugopal had informed the court that the court should take a “compassionate view” and finish the case by issuing a ‘warning’ to the Bhushan. Venugopal also asked the Court not to make him a ‘martyr’ by punishing him. The Attorney General had also asked the court to consider the over three decades of association and work that Bhushan had put in as a lawyer. The top court today while reading out the order observed that “it had considered the advice by the Attorney General” and concluded that conduct of Bhushan also needs to be considered while fixing the quantum of punishment.