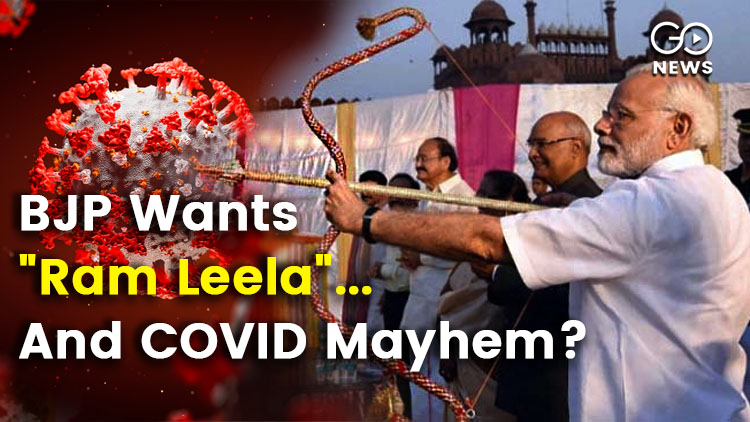 The Centre’s ruling party, BJP (Bhartiya Janata Party), and the RSS (Rashtriya Swayamsevak Sangh) are attempting to hold a physical Ramleela in the national capital amid the possibility of a third wave of the coronavirus pandemic. A meeting was held in Delhi’s Jhandewalan Mandir to plan the same. Kulbhushan Ahuja, the head of the RSS’s Delhi unit, BJP leader and DDA member Narendra Chawla, BJP Vice President Ashok Goyal, and MCD members and representatives of over 60 Ramleela organization committees were present at the meeting to finalize a physical Ramleela event. The country is ready once again to step into the festive season. There are big and numerous cultural and religious festivals slated throughout this month: from Maharastra’s Ganesh Chaturthi, to West Bengal’s Durga Puja, and Dussehra and Deepavali in Delhi. This will lead to large crowds congregating which will in turn aggravate the crisis of the third wave fo the coronavirus.
Also Read:
Wanted Terrorists In, Women Out Of New 'Emirate' Government

NIDM (National Institute of Disaster Management), which comes under the Home Ministry, has warned in its report dated 23rd August that the third wave of COVID infections might reach its peak in October. The number of daily new cases have come down over the past few days, and yet the NIDM warns, the infection rate is rising as well. The R-count of the country has risen from the last days of July from 0.96 to 1, and this is a cause for concern. Arjun Kumar, the Secretary of the Luv-Kush Ramlila Committee, has said that permission has been received from the DDA (Delhi Development Authority), MCD (Municipal Corporation of Delhi), and ASI (Archaeological Survey of India) to use the Ramleela maidan in the capital. He is now waiting for the decision of the Disaster Management Authority, which has recently ordered a ban on gatherings of any kind of crowds in Delhi. While BJP and its associated groups demand a religious event in Delhi, Maharashtra and Bengal have shown restraint and responsibility by restricting such gatherings. Ganesh Chaturthi begins in Maharashtra from Friday. The government has limited the height at which the Ganesh idol will be placed during the 11 day festival, as a crowd control measure to prevent excessive people form gathering to lift it. Neighbouring state Karnataka has also announced restrictions on Ganesh Chaturthi celebrations where the rate of corona infections is high. Tamil Nadu in the south has also restricted the celebration of festivals. Reports have also come in that West Bengal may also limit the celebration of Durga Puja in some ways. Experts have found that there is a direct corelation between people gathering in crowds and the spread of the coronavirus. The aftermath of the Kumbh Mela organized in April in Uttarakhand, or the crowding witnessed in election-bound states and the resultant boom in cases are instances of this. On 12th April 2021, there were 1,69,000 cases of coronavirus in India, and it was during this time that the Kumbh Mela, arguably the largest human gathering in the world, took place. On 3rd May 2021, Hindustan Times reported that poll-bound states saw higher numbers of infections than others. In poll-bound states, there were 291 positive cases per 10 lakh people, whereas in other states it was 276. Delhi faced a deplorable situation during the second wave of the pandemic. Delhi CM Arvind Kejriwal had said that the second wave had peaked at 28,000 cases per day, whereas the number expected during 3rd wave can be up to 35,000 cases per day. The question is when a possible third wave is looming over India which has already seen the devastation of the first two waves, then how much priority do events like Ramleela really have?