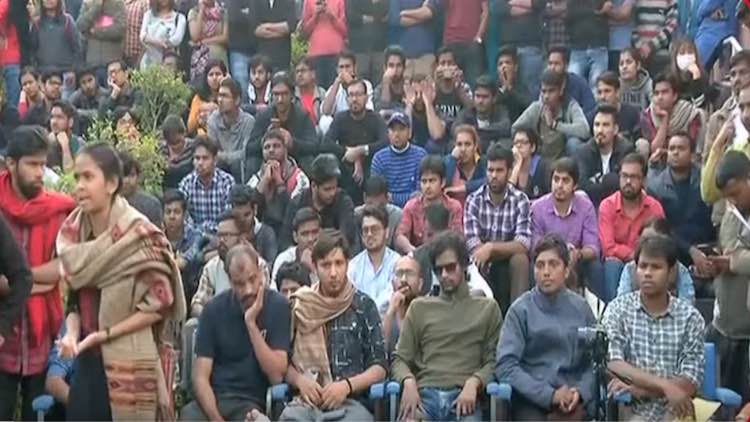 After the face-off with the Delhi Police, the students of Jawaharlal Nehru University Students’ Union on Tuesday said that the ongoing protests against increased hostel fees were for a just cause, and demanded that all notices served to students in and outside campus, FIRs included, be withdrawn immediately. The Delhi police have filed two FIRs in connection with their protest on Tuesday. Addressing a presser, the students said that the Delhi police and CRPF men lathi-charged and detained students, including the four union office bearers, who were marching to Parliament to press for their demand for a complete rollback of the hostel fees hike, among various other issues.
Also Read:
ISRO's Eye In The Sky

The students said they had taken out a peaceful march, but the police stopped them mid-way to Parliament by putting barricades on Monday. The JNU Students’ Union has demanded that the HRD Ministry should intervene immediately and instruct the Vice-Chancellor to withdraw the draft hostel manual which was illegally passed on October 28. And, they said, if the Vice-Chancellor doesn't comply, then the HRD ministry should dismiss him.

"We have been demanding for the last 23 days but no one is listening to us. Instead, lathi-charge was done by the Delhi Police. This is vandalism," a JNU student said, adding that many students who are injured could not be a part of the press conference. They also alleged that the police misbehaved with the female students and did not provide medical aid to the injured students. JNUSU President Aishe Ghosh said, “The manner in which the police handled the situation is very shameful. Even when female officers were present, we were groped by male police officers." JNU students’ march to Parliament over fee hike ended late on Monday evening after day-long clashes. All students returned to the campus after detained students were released. However, the students' union said the protest will go on till their demands are met.