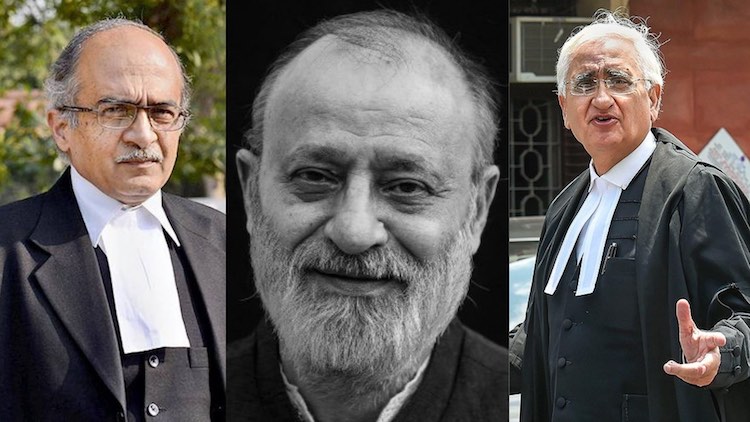 Congress leader Salman Khurshid, Supreme Court lawyer Prashant Bhushan, CPI(M) leader Brinda Karat, scientist Gauhar Raza, have been named in the disclosure statements of accused persons in chargesheet filed by the Delhi Police last week in the Northeast Delhi riots. Apart from these, the names of CPI(M) leader Kavita Krishnan and student leader Kanwalpreet Kaur have also been included. According to Delhi Police, the names of these people surfaced during the statements of Khalid Saifi, arrested in the Delhi riots case, and former Congress councilor Ishrat Jahan. The Delhi Police claims that after the arrest, these people accepted that during the anti-CAA protests, these celebrities were called to gave “provocative speeches” to keep the protests going. A police witness has also said that Salman Khurshid gave provocative speeches. Also Read: Turkey Again Rakes Up Kashmir Issue At UN, India Says 'Gross Interference'

After the name was mentioned in the charge sheet, scientist Gauhar Raza said that he is set on his statement against the Citizenship Amendment Act. Even today, they oppose this law and will do so further because the Constitution of India is under attack. Gauhar Raza also clarified that he is against any kind of violence. In such a situation, there is no question of inciting anyone to violence. Advocate Prashant Bhushan said that trapping influential people against the Citizenship Amendment Act is part of the Delhi Police’s strategy. He admitted that he had gone to some picket sites where he gave a speech against this law and in favor of the protesters. Prashant Bhushan also said that he spoke strongly against the current government and if people turned furious, it is not his responsibility. However, all these statements of the riots accused have been taken in police custody, which have no recognition in the court as evidence. Khalid Saifi’s lawyer alleges that Delhi Police has forcibly made his client sign on fake statements. Khalid Saifi’s lawyer also said that he had already told the court about false statements and forcible signing on plain paper in March and April itself. Ishrat Jahan’s lawyer Pradeep Teotia also says that she has not given any such statement and such statements have no meaning under Section 25 of The Indian Evidence Act. Apart from these, many more influential public figures have been named in the chargesheet filed by Delhi Police. Earlier, CPI(M) general secretary Sitaram Yechury, Swaraj India leader Yogendra Yadav, economist and professor Jayati Ghosh, DU professor Apoorvanand, and filmmaker Rahul Roy were also mentioned in the supplementary chargesheet. Questions are being raised on the investigation of Delhi Police in the Delhi riots case. It is being alleged that the Delhi Police is not putting its hands on the real accused who made inflammatory speeches leading to riots because they are associated with the ruling party.
TAGS Kavita Krishnan Brinda Karat Prashant Bhushan Gauhar Raza Salman Khurshid Delhi Riots Chargesheet Delhi Riots