Delhi Police Caught In Controversy Over Violence In City 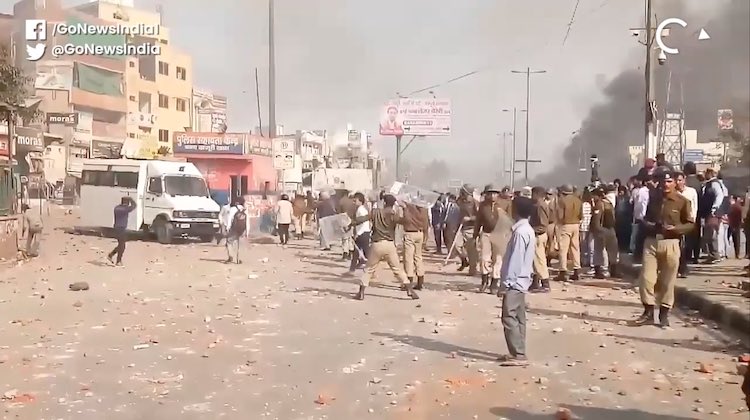 The north-eastern part of national capital Delhi has been in the grip of continuing violence and arson for the past three days. The Delhi Police has been repeatedly claiming that the situation is under control but the ground reality is the exact opposite.  Seven people, including one police constable, have died so far in the violence which began on Sunday. Meanwhile, incidents of stone-pelting and arson came to light in some areas on Tuesday as well.
Also Read:
US Court Convicts Harvey Weinstein Of Rape And Sexual Assault

Such a situation prevails when the Delhi Police is considered a hi-tech police force and it is in a much stronger position compared to police forces in other states of India. Delhi Police is facing tough questions about its role in the violence raging for the past three days in north-east Delhi. In several videos which have gone viral on social media, Delhi Police personnel can be seen with some people who are among those who engaged in violence. Questions are being raised about why the Delhi Police remained mute spectators in front of the rioters and why did it fail to stop murders, arson and looting. The population of Delhi is more than 2.5 crore but in terms of the budget, only Uttar Pradesh Police and Maharashtra Police are ahead of Delhi Police, which means that the Delhi Police is in a better condition financially than other states.  In the year 2018-19, Delhi Police’s budget was Rs 7,858 crore, while Uttar Pradesh Police had a budget of Rs 18,145 crore and Maharashtra Police’s budget was Rs 13,708 crore. Data also reveals that while 198 police personnel are posted per one lakh population nationally, 401 police personnel are posted per one lakh population in Delhi. In terms of technical facilities too, Delhi Police is better equipped than other states of the country. While Delhi Police have installed 5,332 CCTV cameras for security, there are only 2,134 such cameras in UP, the country’s most populous state. Compared to other states, Delhi Police is very professional in gathering intelligence inputs as well. There are 722 police officers in the Special Branch of the Delhi Police, but 965 police personnel have been posted in the Intelligence Wing. Despite this, the Intelligence Wing of the Delhi Police has been proven to be incompetent in issuing alerts for violence in the capital. An area of the national capital has been up in flames for the past three days and the Delhi Police is currently completely on the backfoot. Watch the full report here:

.@DelhiPolice has come under the scanner for their failure to control the #Delhiviolence which has gripped the capital for the last three days. While the force suffered losses, several videos have surfaced of policemen involved in #stonepelting@RaGa_reports #DelhiRiots pic.twitter.com/c8llSU7rPZ