Digital Fakes For Gaining Clout, Spreading Narratives Recently, there was a morphed image circulating online which purported to show Narendra Modi, the Indian prime minister, on the front page of the New York times with the headline “Last, Best Hope Of Earth” and the subtitle “World’s Most Beloved Leader Is Hdre To Bless Us”. The publication subsequently denied it as inauthentic.
Also Read:
Indian Students Spending More On Education Abroad Than Govt. At Home 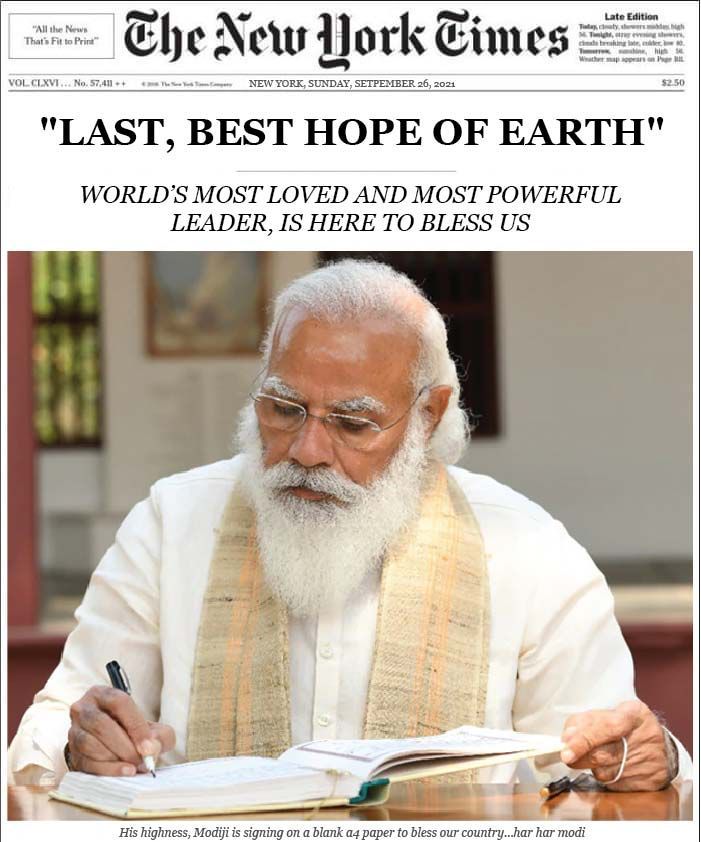 The Fake Image Of Modi On The New York Times Front Page That Went Viral  Similarly, the Indian Express’ Hindi publication Jansatta also tweeted a rebuttal of a fake image doing the rounds on social media, in which Bollywood actor Sharukh Khan is falsely quoted attributing his success to Muslims only, and saying that Muslims only watch films made by the “Khans”.

Fake news has caused immense damage to lives and communities in India. Whatsapp, Twitter, and Facebook have emerged as top spaces where misinformation is easily spread and disseminated to millions within seconds. A few memorable examples of fake news stories that went viral on social media are: Recently, a digitally altered picture has emerged os freedom fighter Subhash Chandra Bose reading a newspaper which is shows reporting his own death. The cycle of fake news appearing and getting debunked has become a ‘whack-a-mole’, cat-and-mouse type game in which disinformation ultimately proves victorious by its sheer number and relentlessness. There are no specific laws as of yet against fake news in India, but the government has amended the IT Act to compel social media companies to reveal the source of messages if so asked by the authorities. However, the media companies that have been misrepresented can claim damages and prtection under copyright and trademark laws  However, the prevalence of IT cells of various political parties, most prominently of the BJP, shows that building political momentum through mass online communication is intrinsically in the interests of gaining and retaining power. Dealing With The Menace Of Fake News In the absence of a specific legislation, here are the applicable Indian laws and channels that are used for recourse for fake news: Below is a graph indicating the various measures that counties have taken globally against fake news: 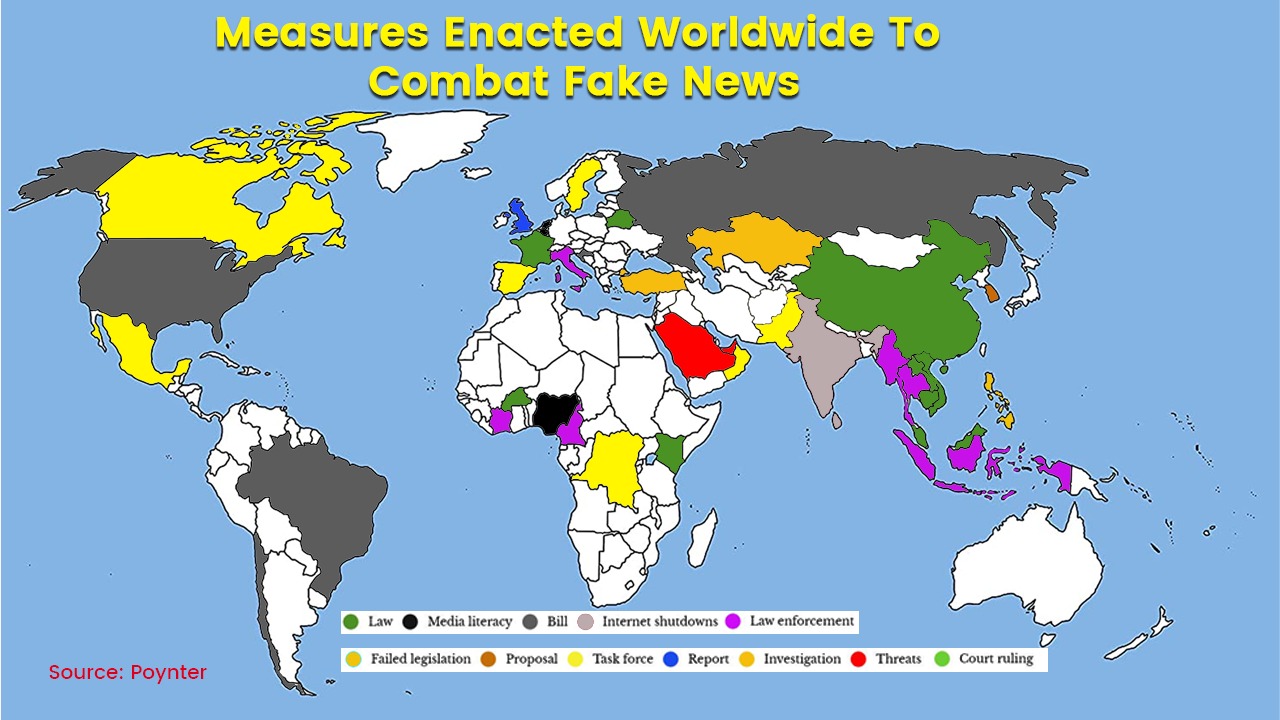 After the violence and rioting witnessed in Delhi in 2020 as part of the anti-CAA protests and unrest, the Delhi Assembly constituted a Committee on Peace and Harmony in March 2020. It recognized the spread of fake news and hostile rumours as a factor in inflaming violence. "We will apprise the people that if anyone shares fake news, hate content or a rumour, which can cause enmity between two communities, then it is a criminal offence which can invite a jail term of three years. We will seek complaints from people through the campaign in radio, newspapers and other media platforms”, the committee had said. It further sought to incentivize people to report such activities with a reward of ₹10,000 if an FIR was registered on their complaint. The cyber cell of the Kolkata Police and West Bengal Police made 30 arrests for spreading fake news in April 2020, according to Hindustan Times. They were booked under Disaster Management Act (DMA), 2005, and Section 505 (1) (b) of the Indian Penal Code (Statements conducing to public mischief). Fake News Regulation: Good Or Bad?  The International Press Institute (IPI) in a detailed piece on global measures to tackle misinformation during the pandemic, maintains that such measures are “intensifying global media freedom challenges”.

Graphic Released BY The Internet Freedom Foundation After Delhi Government's Anti-Hate Speech Campaign  IPI Deputy Director Scott Griffen “Disinformation poses a serious challenge to open societies, and the coronavirus pandemic has shown just how dangerous online falsehoods and conspiracy theories can be,” he said. “But while combating online disinformation is a legitimate objective in general, handing governments and state-controlled regulators the power to decide what information is true and what is false is a dangerously wrong path”. 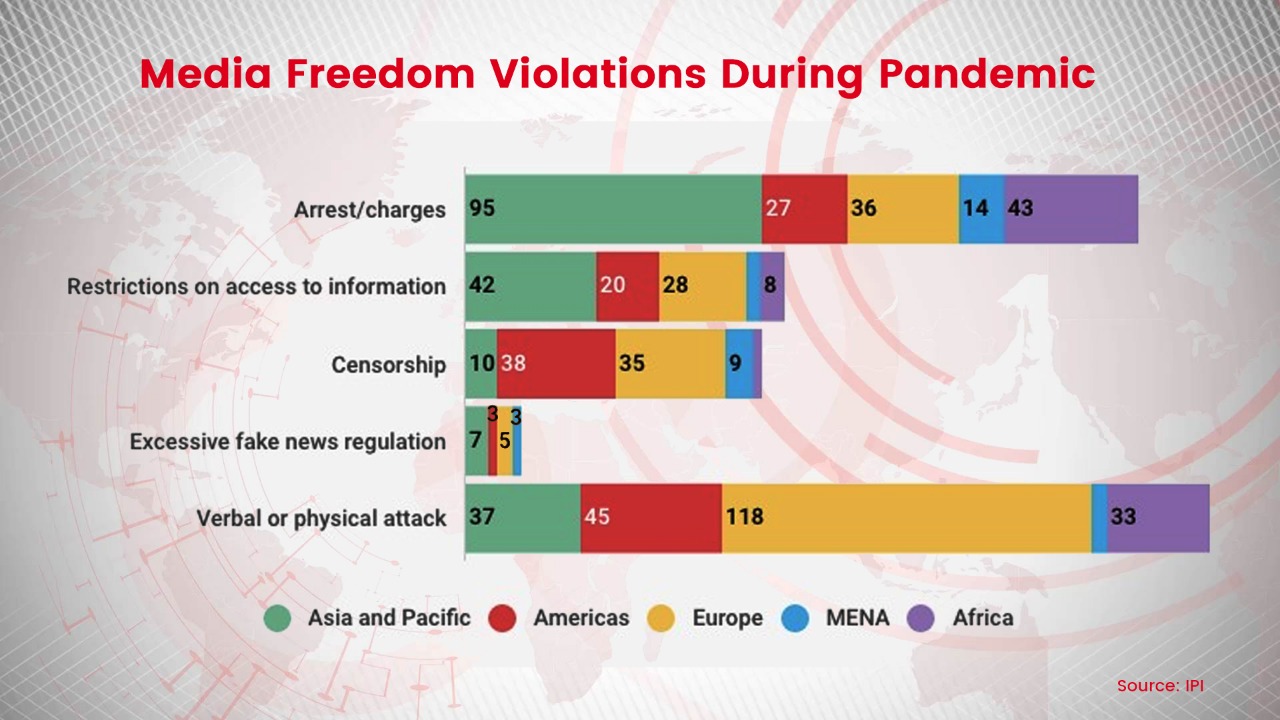 Internet video sharing giant YouTube has also announced a ban on coronavirus misinformation. It has taken steps to ban all anti-vaccine misinformation on its platform. The topic of vaccinations had a noticeable, though not large, political traction in the United States and other Western countries. After the pandemic and the crises of inoculation, they havereceived a further boost, with many people actively seeking information on vaccines and their effects. As of yet, YouTube has removed 13,000 such videos and will continue doing the same.