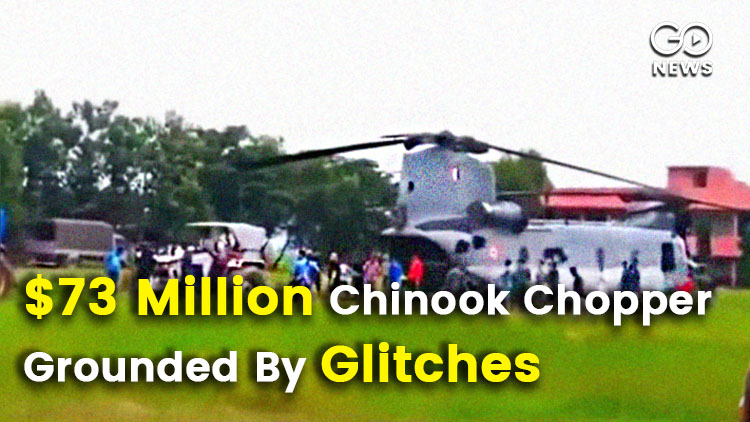 The Indian Army’s Chinook helicopter had to make an emergency landing in Buxar, Bihar, due to technical issues. This incident occurred on August 25th when the Chinook chopper had to land in Manikpur High School in Buxar. According to security officials, there has been no damage or loss due to the landing. All 15 people aboard the helicopter are safe. According to Hindustan Times, Buxar District Magistrate Aman Sameer said that “the newly acquired helicopter took of from Prayagraj and was en route to Bihta Air Base near Patna when it had to make an emergency landing”. He informed that there is no major damage report. Until such time that the Air Force retrieves the chopper, it will be secured by local police.
Also Read:
Social Media Beats TV In Indian News Consumption

Chinook is a multi-role, heavy lift helicopter which is mainly used to transport soldiers, artillery, equipment, and fuel. Because of the technical glitches, it failed to take off, and four tractors were also used to attempt to pull it but to no avail, due to the chopper’s weight. According to the website of The Boeing Company that designs these helicopters, each weighs more than 22,000 kg and can carry 11 tons in flight. The Government of India had made a deal for acquiring 15 of these helicopters from Boeing that was finalized in 2015. The company declared that it had fulfilled the delivery of all 15 units by February 2019. These were acquired by India through the Foreign Military Sale after negotiations between India and the United States. In September 2015, the Government of India inked a $3 billion deal with Boeing for acquiring 22 Boeing AH 64-E Apache Longbow attack helicopters and 15 Chinook heavy-lift helicopters. Within this, the Chinook helicopters cost $1.5 billion. The cost per chopper is $73 million dollars. Now with this expensive  Chinook helicopter experiencing technical issues leading to an emergency landing, the matter has become a cause for concern and debate.