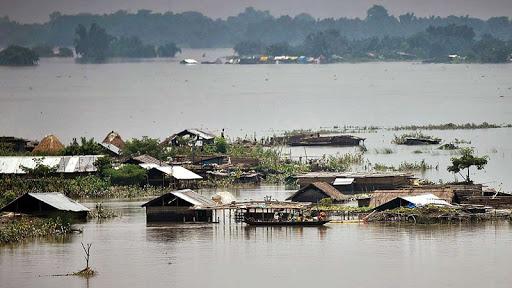 After Assam and Bihar, the death toll from floods in Odisha is also increasing. According to new figures, 12 people have died so far. In these, 5 people died due to house collapse and drowning in Bargarh, Nuapada, Jajpur, Baleshwar and Bhadrak. Due to this, 7 people lost their lives in Mayurbhanj, Sundergarh.

5 more people died in Odisha due to house collapse & drowning in Bargarh, Nuapada, Jajpur, Baleswar and Bhadrak. 7 people had died earlier in Mayurbhanj, Keonjhar and Sundergarh and 2 were missing in Bargarh and Mayurbhanj: Pradeep Kumar Jena, Special Relief Commissioner (28.08) pic.twitter.com/1ufnRM6QtD

According to PK Jena, because of Mahanadi river in spate, there is a danger of floods in Puri, Cuttack, Jagatsinghpur and Nayagarh districts. 40 gates out of 64 Hirakud Dam on Mahanadi has been opened after the water level rises. Mayurbhanj, Balasore, Jajpur, Bhadrak, Boudh, Kendrapara and Sonepur districts have recorded the highest rainfall in the state.
Also Read:
Amnesty Accuses Delhi Police Of Being 'Complicit', 'Indulging' In Violence With Rioters

At the same time, normal life has been derailed in many districts due to continuous rains in Jammu division of Jammu and Kashmir in the last 5 days. According to the Sub Divisional Magistrate of Jammu, due to the rains in the last two days, due to landslides, about 30 kutcha houses have been damaged and roads have been affected in many places. In Reasi also, the noise is stalled due to landslides.

J&K: Several houses damaged in Rajouri's Thanamandi , following heavy rainfall in the area. Sub Divisional Magistrate says,"Around 30 kutcha houses have been partially damaged & roads are also affected due to the landslide that has occurred due to rainfall in the last two days." pic.twitter.com/dHZ370ttIs

Due to landslides in the hill state of Himachal Pradesh, three houses were damaged in Malwa village of Kullu while one house was completely destroyed. Currently, 40 people are homeless in Kullu. Heavy rains have been recorded in Mandi, Bilaspur, Kasauli and Solan in the state. At the same time, more than 15 districts of UP are still in the grip of rain and floods. A police station in Meerut is flooded. Apart from these, Lakhimpur Kheri, Mau, Shahjahanpur, Ayodhya, Azamgarh, Bahraich, Ballia, Barabanki, Basti, Deoria, Farrukhabad, Gonda, Kasganj, Sitapur and Kushinagar are also under threat of flood. In West Medinipur district of West Bengal, people had to leave their homes due to floods due to rising level of Shilabati river. People are reaching the safe areas with the help of boats. At the same time, people trapped in floods are being rescued in western Bardhaman Birbhum, Hooghly and East Bardhaman.

#WATCH West Bengal: People use boats to commute in Ghatal area of Paschim Medinipur district, as the region is flooded due to rise in the level of Shilabati river. (28.08.2020) pic.twitter.com/AQ8hCFEriR

Similarly, Madhya Pradesh has received heavy rainfall in the past 18 years. Many areas have been completely submerged in the capital Bhopal, Narsinghpur, Jabalpur, Sagar, Chhindwara, Betul, Balaghat, Seoni. In Hoshangabad district, the water level of Narmada river has reached 4 feet above the danger mark of 964 i.e. 968.90 feet. Meanwhile, all the 13 gates of Tawa Dam have been opened up to 30-30 feet, after which 5,33,823 cusecs of water is being released from here every second.

#WATCH Madhya Pradesh: All 13 gates of the Tawa Dam in Hoshangabad's Itarsi opened by thirty feet each today, releasing over 5,33,823 cusecs of water. pic.twitter.com/MQh1Rb4Hp6

Chhattisgarh, adjacent to Madhya Pradesh, also recorded 1052.9 mm of rain on Friday, while 901 mm is normal rainfall. Due to incessant rains, there are flood conditions in the villages of Dhamtari district after which all the four gates of Dudhwa, Sondhur, Dam Gangrel and Murroomsili dam have been opened. Many rivers and streams are in spate due to heavy rains in the districts of Bilaspur, Surguja divisions of the state and north of Durg division.