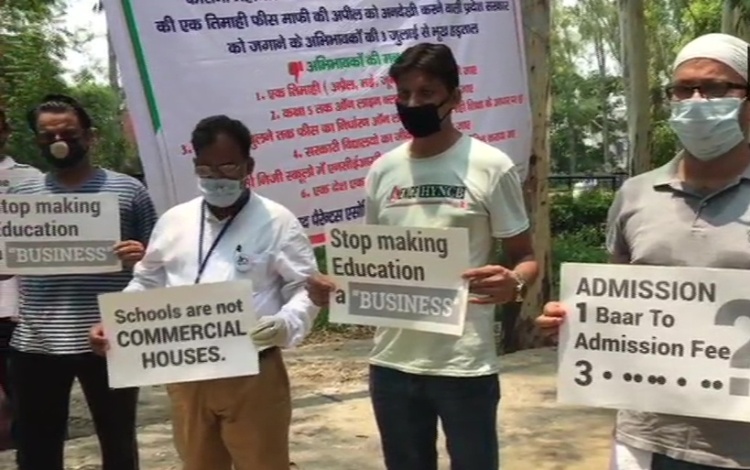 With thousands of jobs and work lost due to the lockdown, it has become difficult for parents to pay the school fee of children. There is a lot of tension between parents and schools on this. On one hand, many state governments have spoken about waiving the fees, on the other hand, the school administration is adamant on demanding fees by citing the salary of the staff. Amidst this tussle, troubled parents sat on a hunger strike in UP’s Ghaziabad seeking a waiver of three months among other demands. At around four o'clock in the evening, the District Inspector of All Schools (DIOS) stopped their strike by giving juice to the parents and the administration has also assured to solve the problem by Thursday.

Ghaziabad: Members of Ghaziabad Parents Association yesterday sat on a hunger strike over their demands, including waiving off of the school fee of private schools, for the months of April, May and June 2020. #COVID19 pic.twitter.com/u7ePQ2IYKe

Seema Tyagi, president of the Ghaziabad Parents Association, said that the work of parents has come to a standstill in lockdown, jobs have been lost. Nobody's business is running so no salary is received. In this case, the parents are unable to pay for children's fees. There has been a demand for a three-month fee waiver for a long time. For this, campaigns were also conducted on social media and letters were also given to officers, ministers and leaders, but no solution has been found so far. Later, the parents decided to sit on a hunger strike. The association demands that teachers and other staff be paid salary from the reserve fund of schools. Action should be taken on schools which have not submitted their balance sheets. It also asked to not run online classes till 5th class. The fees of the schools should be kept on the basis of online classes with a waiver of three months fee. Likewise, in the past, the parents have raised their voice over issues such as expensive books, dress, stationery, arbitrary school fees, implementation of NCERT books. But the arbitrariness of the schools continued and no strict steps were taken by the administration. After the whole case, a meeting has been called on Thursday with officials of Private School Federation, DIOS, Basic Education Officer, ADM Finance etc.