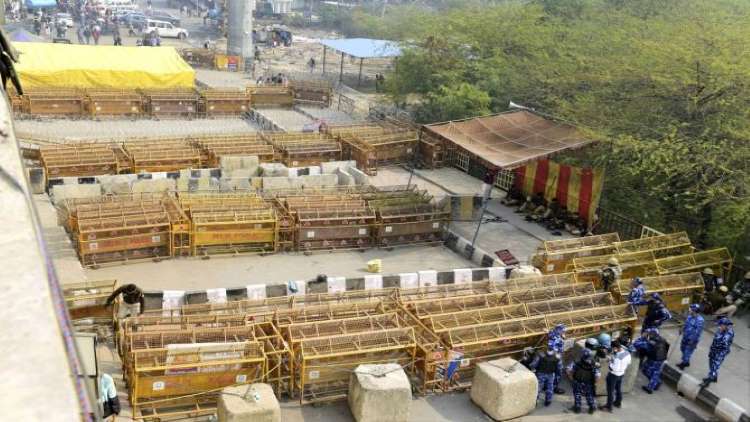 A group of 75 former civil servants on Friday wrote an open letter, saying that the central government's approach towards the farmers' protest against the three new farm laws has been an adversarial and a confrontationist one from the very beginning.  The letter signed by 75 former civil servants, including Najeeb Jung, Julio Riberio and Aruna Roy, who are part of the Constitutional Conduct Group (CCG) also said that the apolitical farmers are being treated like "an irresponsible opposition to be derided, demonised and defeated" and "great injustice has been done to farmers and is still continuing".
Also Read:
'Democracy Backsliding': India Slides 2 Notches To 53rd Rank In EIU's Index

The repeated, albeit unsuccessful, attempts to polarise the agitation along regional, communal and other lines are also reprehensible, they said. "Such an approach can never lead to a solution," the letter stated. On the Republic Day incident, the group said the government has still not responded to the farmers’ assertion that the Delhi Police erected barricades on the route agreed upon for the tractor rally, forcing a few of the farmers to take a different route. Read their full statement We are a group of former civil servants of the All India and Central Services who have worked with the Central and State Governments in the course of our careers. As a group, we have no affiliation with any political party but believe in impartiality, neutrality and commitment to the Constitution of India. We, the Constitutional Conduct Group (CCG), would like to reassert and reiterate our support for the farmers who are agitating for repeal of the three farm laws. We are particularly concerned about the developments that took place on 26 January 2021, Republic Day, the efforts to lay the blame on the farmers for the disruption of law and order on that day and the events that have followed. 2.         We note the following with grave concern: 2.1       The approach of the Government of India (GoI) towards the farmers’ protest has been an adversarial and confrontationist one from the very beginning, treating the apolitical farmers like an irresponsible opposition to be derided, demonised and defeated. The repeated, albeit unsuccessful, attempts to polarise the agitation along regional, communal and other lines are also reprehensible. Such an approach can never lead to a solution. 2.2   Regarding the incidents that happened on Republic Day: i)          The GoI has still not responded to the farmers’ assertion that the Delhi Police erected barricades on the route agreed upon by both the farmers and the Delhi Police for the tractor rally due to which  a few of the farmers were forced to take another route. ii)         When one section of farmers hoisted their flag below the National Flag at the Red Fort, why were the police doing literally nothing to prevent this occurrence? What action has the GoI initiated against those in the Delhi Police, Ministry of Home Affairs and Ministry of Defence for dereliction of duty? iii)        Why is it that this particular action by a few unruly elements was shown repeatedly by the government controlled and other media? What happened in the remaining places? Why was the peaceful tractor parade in other places, with citizens welcoming the farmers with flowers and food, not shown? 2.3       Post Republic Day: i)          How is it that in Singhu, where there were barricades clearly dividing the farmers sitting in demonstration, a few hooligans were able to break the barricades and attack the farmers in the presence of police? Why did the police intervene much after the attack took place? We have seen TV visuals where one unruly person had even snatched a lathi from a policeman and attacked one of the farmers. ii)         Why is it that essential services to the agitating farmers such as water, electricity and the internet have been blocked, putting the thousands of people gathered there to unspeakable difficulties? iii) Why have barricades with concrete barriers, concertina wire, nails and spikes been raised on the borders of Delhi to prevent the agitating farmers from entering? Such barricades are not even erected on the borders of India with its neighbouring countries! Are the agitating farmers being seen as enemies of the country? 3.1       Why are sedition charges made out against certain journalists and a Member of Parliament of an opposition party on flimsy grounds, solely for certain tweets posted by them when the factual position was not clear? The registration of the same case with very similar First Information Reports in various states run by the BJP smacks of vindictiveness and seems to be aimed at muzzling legitimate, democratic protests against the policies of the GoI. 3.2       Holding or presenting a view against the GoI or reporting different versions given by different people about an incident can, under no law, be held as an act against the nation. It bears repetition to say that a protest against a policy or action of the Government is not an act of sedition against the nation. 3.3       Withdrawal of cases against the farmers and tweeters, including the journalists, withdrawal of cases against all except miscreants who engaged in unlawful activities and stopping the vicious and sickening propaganda of calling the farmers Khalistanis are the minimum requirement for a conducive atmosphere for resumption of talks. 4.         If the GoI is indeed interested in an amicable solution, instead of proposing half-hearted steps such as putting the laws on hold for eighteen months, it can withdraw the three laws and think of other possible solutions, given the basic Constitutional position that the subject of agriculture is in the States’ list in the Constitution of India. 5.         We in the CCG have, on 11 December 2020, issued a statement supporting the stand of the farmers. All that has happened since has made us feel even more strongly that great injustice has been done and continues to be done to the farmers. Therefore, we urge the GoI to take remedial action on an issue which has caused so much turmoil in the country over the past several months. 6.         We reassert and reiterate our support to the agitating farmers while expecting the GoI to provide a healing touch and to solve the issue to the satisfaction of the stakeholders.