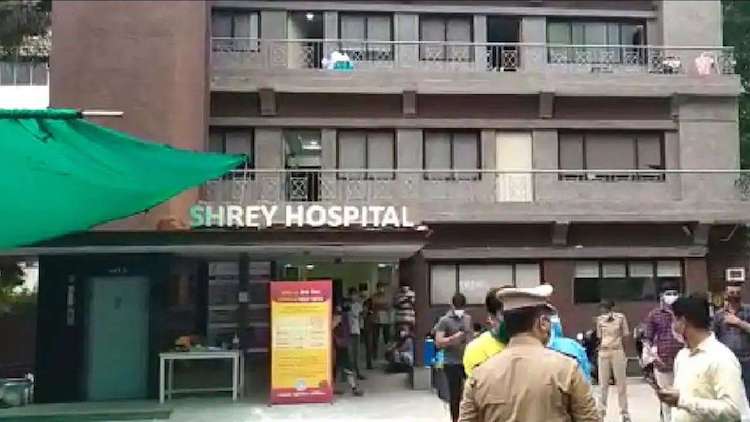 Eight patients died while a few were injured in a fire that broke out at a Covid hospital in Ahmedabad, Gujarat. Among the dead are five men and three women. All were admitted to the ICU and were said to be battling COVID-19.

8 people have died in the fire incident. Other patients have been shifted to a safer place. A thorough investigation will be conducted: Rajendra Asari, JCP, Sector 1, Ahmedabad#Gujarat https://t.co/75rcozXCWY pic.twitter.com/3zsVmNNsTZ

The accident took place at Shrey Hospital in the Navrangpura area of ​​Ahmedabad at 3.15 am. There was a fire in the ICU ward on the fourth floor. Though the cause of the fire has not yet been ascertained, according to the initial investigation, the fire was caused by a short circuit. However, soon the fire was extinguished and the fire brigade was completely under control at 4.20 pm. According to Rajiv Kumar Gupta, Additional Chief Secretary of Gujarat, the rest 41 patients were admitted to Sardar Vallabhbhai Patel Hospital and the bodies have been sent for postmortem.

Prime Minister Narendra Modi expressed grief via a tweet on the incident. PM also spoke to Gujarat CM Vijay Rupani and Ahmedabad Mayor Bijal Patel about the situation. The administration also said to provide all possible help to the affected people.

Saddened by the tragic hospital fire in Ahmedabad. Condolences to the bereaved families. May the injured recover soon. Spoke to CM @vijayrupanibjp Ji and Mayor @ibijalpatel Ji regarding the situation. Administration is providing all possible assistance to the affected.

Fire at Shrey Hospital in Ahmedabad: PM Narendra Modi announces ex-gratia of Rs 2 Lakhs each from Prime Minister's National Relief Fund (PMNRF) to the next of kin of the deceased. Rs 50,000 to be given to those injured due to the fire. #Gujarat https://t.co/KO3WHMkgH8 pic.twitter.com/kATkBezSxx

Meanwhile, according to the Gujarat Chief Minister’s Office, CM Vijay Rupani has ordered an inquiry into the fire incident at the Shrey Hospital in Ahmedabad. Sangeeta Singh, Additional Chief Secretary, Home Department will lead the investigation. CM Vijay Rupani has also ordered a report within 3 days.

Alibaba’s Tmall vs. Pinduoduo And Amazon: Who Will Win China’s E-Commerce War?