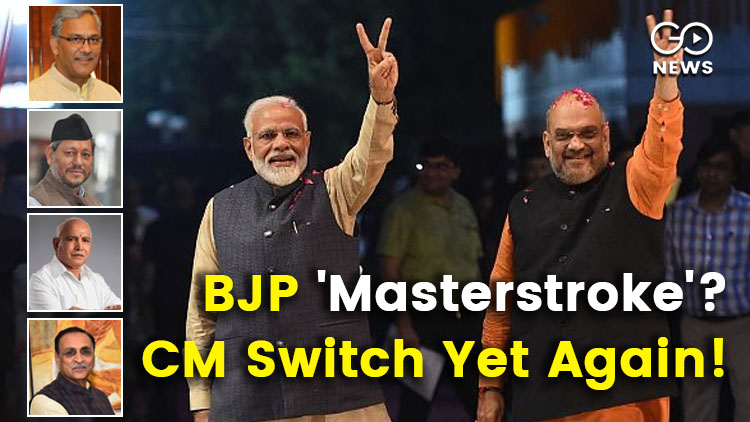 Ex- Gujarat CM Vijay Rupani has joined the list in the names ofthe BJP’s Mukhyamantri Badlo (Change CM) campaign. The reins of the state have now been placed in the hands of a Patidar, Bhupendra Rajnikant Patel, who was appointed Chief Minister after the party’s legislative body meet in Gandhinagar attended by Home Minister Amit Shah. The decision to change the Chief Minister(CM) of the state came at a time when efforts are being made to have early elections in Gujarat to coincide with the Assembly Elections in Uttar Pradesh. Bhupendra Patel’s established at the top post hints towards this motive. All the contenders for the CM post in Gujarat were from the Patidar caste, including Union ministers Mansukh Mandaviya and R.C. Faldu.
Also Read:
EXCLUSIVE: Government Spent Less When Covid Deaths Spiked in India

The Patidars are a dominant caste in Gujarat with a significantleverage on the state’s political economy. They have a strong presence and control of the state’s cooperative, education, realty, and construction sectors, and also in small and medium level enterprises. Leaning On Patels' Support The BJP’s first Chief Minister from this community was Keshubhai Patel, who assumed the post in 1995. Media reports also indicate that there was an anti-incumbency sentiment due to the perception of incompetency and mismanagement during the pandemic’s second wave. It sems that Delhi is pushing the buttons on the remote control to help pacify this feeling in the people. After the remote button was pressed suddenly, Vijay Rupani read out a pre-written resignation statement of 500 words in front of the cameras, within which he thanked the Prime Minister 5 times. According to media reports, one Gujarat BJP leader has said that this decision was made because of Amit Shah’s protegee Vijay Rupani’s mishandling of the state’s politics over the past five years. This prompted Prime Minister Narendra Modi to have him removed from the post. In the last Gujarat Vidhan Sabha (Assembly) Elections held in December 2017, the incumbent BJP just about managed to hold on to a simple majority with 99 out of 182 seats, that too with difficulty. Now it is being said that the Assembly elections may be conducted in the state 8-9 months before schedule. BJP Has Flipped The Switch On 4 CM’s In 6 Months Gujarat is the third state under the BJP’s ongoing ‘Change CM Campaign’ wherein the CM has been shunted before term for the third time in three months. In Karnataka, Lingayat heavyweight B.S. Yediyurappa resigned as CM on 26 July leaving 2 years before his term was due to end in 2023. Basavraja Bommai is the CM of Karnataka. Tirath Singh Rawat, who replaced Trivendra Singh Rawat in Uttarakhand, resigned just 115 days afterwards. Now, the Uttarakhand CM in his place is Pushkar Singh Dhami, a Kumaoni Rajput. Seen this way, Vijay Rupani becomes the fourth chief minister under the ‘Change CM’ campaign who had to quit his post. Disharmony In BJP Governments Aside from the instability mentioned in the states above, all is not well in the governments of Uttar Pradesh and Madhya Pradesh either. The differences between UP Deputy CM Keshav Prasad Maurya and the state’s chief minister Yogi Adityanath keep coming to light. Although this matter is seldom discussed within the BJP, one of the fairly apparent reasons for this is the tight grip that UP CM Adityanath maintains on the state, whereas his caste, the Thakurs, constitute only 7-8% of the state’s Hindu population. Meanwhile, the flames that erupted recently within the Madhya Pradesh government are yet to die down, although the BJP has denied any rumours circulating about cutting short Shivraj Singh Chouhan’s term in a similar manner. It is being said that the closed door meetings featuring Chouhan’s opponents such as Kailash Vijayvargiya, Narottam Mishra, and Prahlad Patel with BJP leaders in Madhya Pradesh may throw up any kind of decision in the future. The state is due for elections in 2023 and experts believe that not just the government, but the party’s rank-and-file too, is miffed with Shivraj Singh Chouhan. In such a scenario, the strategy being applied to other states may find its way to the heart of the country, Madhya Pradesh, as well.