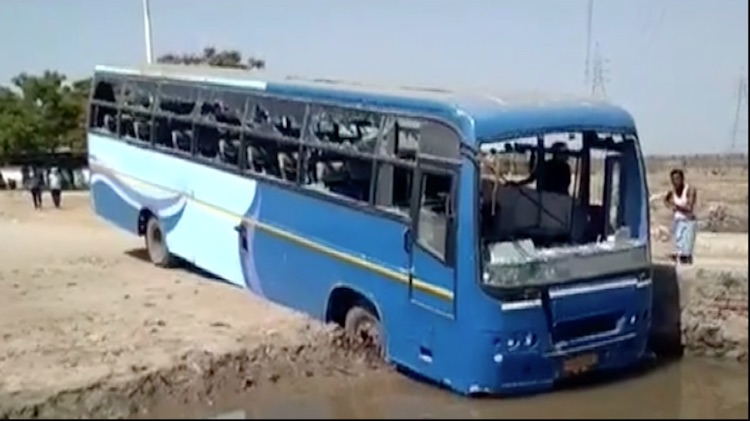 Migrant labourers have had to bear the brunt of the deterioration of mutual coordination between the Gujarat and Uttar Pradesh (UP) governments. A Shramik Special train was scheduled to operate from Gujarat’s Bhavnagar to UP but due to the lack of synergy between the governments of the two states, the train was cancelled at the last minute.
Also Read:
On The Rise Coronavirus Cases In India: State-Wise Data

As a result, labourers trying to go back home for the past 50 days ran out of patience and vandalised a bus. The Bhavnagar Police have arrested 10 labourers in this matter.  These migrant labourers work at the Nirma Limited Chemical Plant in Bhavnagar. Around 50 of them were being taken from the Nirma Plant to the Bhavnagar Railway Station but mid-way, they found out that their train had been cancelled. After this, the labourers began creating ruckus there itself. Officers had to go to the spot and explain the situation to them. They were assured that arrangements to send them to UP will be made soon. However, when the labourers reached their colony, they damaged the bus there too. According to Bhavnagar District Magistrate Gaurav Makwana, the Gujarat government had asked the UP government for permission to send the train but there was no response and the train had to be cancelled. Bhavnagar Superintendent of Police Jaipal Singh Rathore said that the labourers became fearful that their company is not letting them go back home and they flared up because of this reason but it was not true. Watch the video story here: