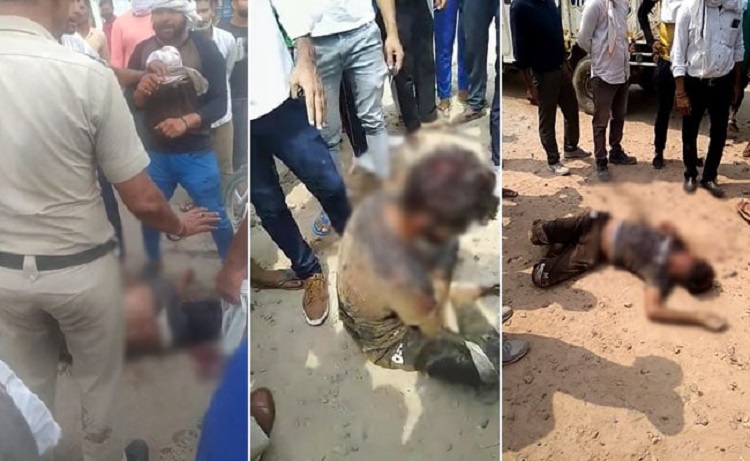 In Gurugram, adjacent to Delhi, a man has been beaten by cow vigilantes with a hammer over suspicion of carrying cow meat. Police have arrested an accused named Pradeep Yadav after registering an FIR, while the remaining accused are still absconding.

The incident is from the Badshahpur area of ​​Gurugram where a man named Lukman was going to deliver meat at around 9 am on Friday. It is alleged that 4 to 5 cow vigilantes caught Lukman near the Jumma Masjid in Gurugram and then attacked him with a hammer and sticks on suspicion of selling beef. After this, the accused abducted Lukman in the same vehicle and after seeing the police near Bhondsi jail, the attackers fled the scene, leaving the car behind.

An eyewitness made a video of the incident on his phone. In the video, a cow vigilante can be seen kicking the injured driver and the people present there are watching as mute spectators but no one tried to stop him.

A 23-year old truck driver was thrashed with hammers and rods by a group of cow vigilantes in #Badshahpur on Friday morning while he was on his way to deliver #buffalomeat in Gurugram. #Gurugram
-continue readinghttps://t.co/vQhCRRfLVP pic.twitter.com/4K9VGD5I8K

After this, with the help of the police, the injured Lukman was admitted to the hospital in Sector 11A, after which he was referred to Artemis Hospital where he is undergoing treatment. Lukman’s family alleges that even after calling the police after the incident, they arrived two hours late due to which the accused escaped easily.

Targeting Haryana’s BJP government over the incident, Congress Rajya Sabha MP Digvijaya Singh tweeted, ‘A heinous crime being committed against an Indian citizen & Haryana Police watches and allows the culprits to flee? Is there any accountability of the Haryana Police? Is there a rule of Law?’

A heinous crime being committed against an Indian citizen & Haryana Police watches and allows the culprits to flee? Is there any accountability of the Haryana Police? Is there a rule of Law? https://t.co/kDRm62YZrL

The Police currently refuse to talk about the beef angle but Sub Inspector Rohtash said that a sample of meat has been taken and sent to the lab for examination. During this, a case of border dispute of the police also came up, after the incident, the Badshahpur and City Police were seen putting the matter on each other’s police stations. At the same time, after the escalation of the case, the Badshahpur police station registered a case in the evening.

In the past, several other cases of cow vigilantism related violence have been reported in Haryana and the Khattar government has been accused of not taking action against them.