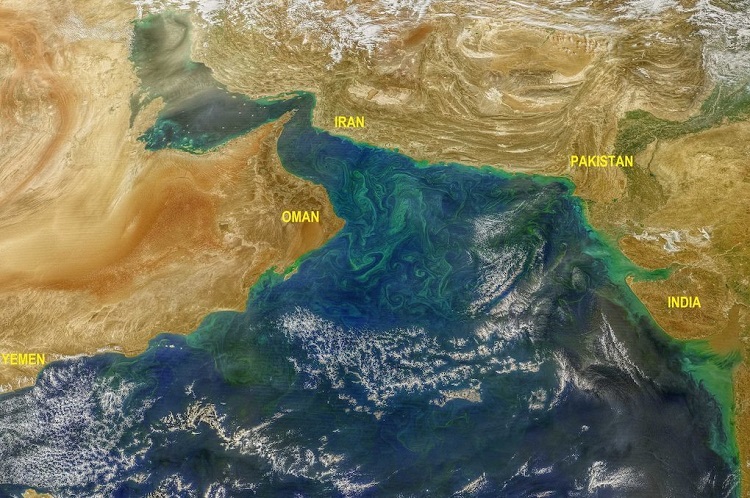 A new study says algae blooms that can be seen from space are being caused by the warming of snow-clad mountains thousands of miles away Global warming is transforming the ecosystem of the Arabian Sea, new research has found. Scientists have linked snow melting in the Himalayas to the loss of important plankton more than 1,000 miles away, which is affecting fish populations and the fisheries and coastal people that depend on them. Also Read: Reopening Of Bars And Restaurants Bring Back Glitz To New York City

As snow and ice melt in the Himalayan mountains, the winter winds that blow down from them are becoming warmer and more humid, the researchers say. This alters the currents of the Arabian Sea and distribution of nutrients – and in turn the marine food chain, with fish struggling in the new conditions. This is happening at a much faster rate than that predicted by global models, the study says. The Arabian Sea is a unique marine ecosystem in the Indian Ocean. Its currents are controlled by monsoon winds that reverse direction in summer and winter. Normally, during the summer south-west monsoon season, winds & the rotation of the Earth bring cold, nutrient-rich waters to the surface. During winter, the cold north-east monsoon winds chill surface water, causing it to sink and deeper waters to rise. The mixing of waters fertilises them, and tiny ocean plants and microorganisms proliferate, which fish feed on.

Global warming has had a “disproportionately strong influence on the Eurasian land surface”, the team of scientists from China, Oman and the US say in their report. The result is a steady decline in snow cover over the Tibetan Plateau region of the Himalayas. Joaquim Goes is Lamont research professor at the Lamont-Doherty Earth Observatory at Columbia University in the US and one of the authors of the new study. He told The Third Pole that research by his team published in 2005 found that the summer monsoon winds were becoming stronger because of the melting of snow on the Himalayan-Tibetan Plateau. This was creating conditions for phytoplankton to increase. “The new study shows how the snowmelt on the Tibetan Plateau is continuing along the same trajectory [whereby snow melting causes the monsoon to change and more marine plants to grow] into the winter monsoon too,” Goes said.As the snow melts, less sunlight is reflected back into the atmosphere, warming the Indian landmass. This means the north-east monsoon is warmer and more humid, so does not cool surface waters as much as it used to. The new study says this is “undermining” the mixing of waters during winter. It adds that over the past 40 years, the Arabian Sea has had “a profound loss of inorganic nitrate”. This is because larger quantities of sea plankton use more oxygen to produce energy. As the mixing of the waters slows down, oxygen-deficient zones increase, and the microbes instead degrade nitrates to produce energy. The oxygen-deficient zones across the Arabian Sea support algal growth. Typically such areas occur at depths of 180-1,000 metres in the ocean, Goes said. But these zones now happen at 100 metres in the Arabian Sea, especially near the coast of Oman. This is because less oxygen gets into the water when the surface is warmer, he explained. Read the full article here - https://www.thethirdpole.net/2020/06/22/harmful-algae-blooms-in-arabian-sea-linked-to-himalayas-melting/ Courtesy- www.thirdpole.net
TAGS Arabian Sea Himalayas ecosystem global warming

By Rahul Gautam 19 hours ago