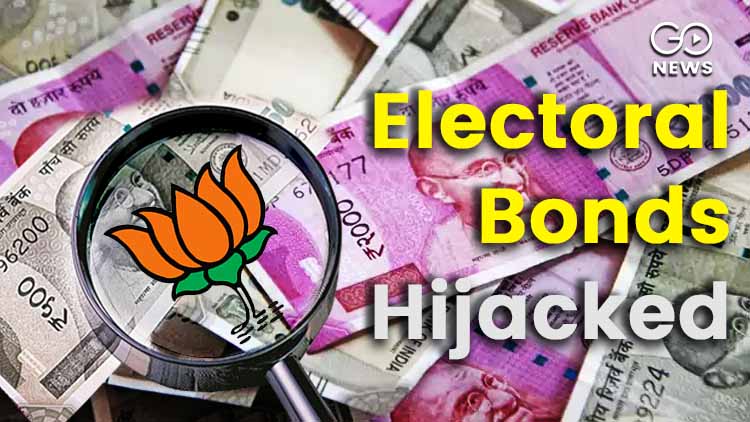 It seems like the BJP has hijacked the controversial Electoral Bonds which are issued to fund political parties. Considering the data from the past 17 phases, it emerges that the BJP has received the maximum donations from individuals and corporates. According to one report, the BJP received its highest amount of donations through Electoral Bonds in 2019, the year which saw a 76% jump in the donations received. The figures show that in the past three years, the BJP received donations of ₹4,215 cr. Of this, ₹210 cr. was spent in 2017-18 and ₹1,450 cr. in 2018-19.  An English daily reported ₹2,555 cr. received as donations by BJP in 2019-20. On the other hand, other political parties have received minimal funding through electoral bonds.
Also Read:
“There has indeed been a diminution in our influence in the subcontinent… and the worl

Thus, Congress received ₹706.12 through Electoral Bonds. Similarly, TMC received ₹197.46 cr., Sharad Pawar’s NCP received approximately ₹60 cr., and the AAP got ₹18 cr. through Electoral Bonds bought by corporates and individuals. Election Watch- ADR’s report tells us that 14,363 Electoral Bonds worth a total of ₹7,380.6 cr. were sold in the period between March 2018 to July 2021. In this period, 14,217 with a total worth of 14,363 Electoral Bonds worth a total of ₹7,380.6 cr.7,360 cr. were redeemed by various political parties. The report shows that of the total worth of Electoral Bonds purchased, 49.07% was bought during the Lok Sabha election campaign from March-April 2019. It also revealed that in the last three years, 92.3% of the Electoral Bonds purchased (worth ₹6,812 cr.) had a face value of 1 cr., which indicates the fact that these bonds were purchased by corporations much more than by individuals. The anonymity provided to donors and political parties through the electoral bonds scheme has led to its emergence as the most popular method of political funding. In 2018-19, national political parties received 52% of their total income from it, while it comprised 54% of regional parties’ income. The ADR report for the financial year 2018-19 states that four political parties¾ BJP, Congress, NCP, and TMC¾ declared ₹1960.68 cr. as their total income from electoral bonds. On the other hand, seven regional parties¾ BJD, TRS, YSR-C, Shiv Sena, TDP, JDS, and SDF declared a total ₹578.49 cr. raised through electoral bonds.   It is thus obvious that the sale and use of electoral bonds is bound to run into questions. Recently, a plea to ban electoral bonds was made in the  Supreme Court before Vidhan Sabha elections, though then-CJI S.A. Bbde had refused to put a stay on them. During the hearing, lawyer Prashant Bhushan had submitted a plea that Electoral Bonds were a way to bribe and curry favour with the party in power, in the name of political donations.