Head Covering, Religious Symbols Seen In All, Not Just Muslims 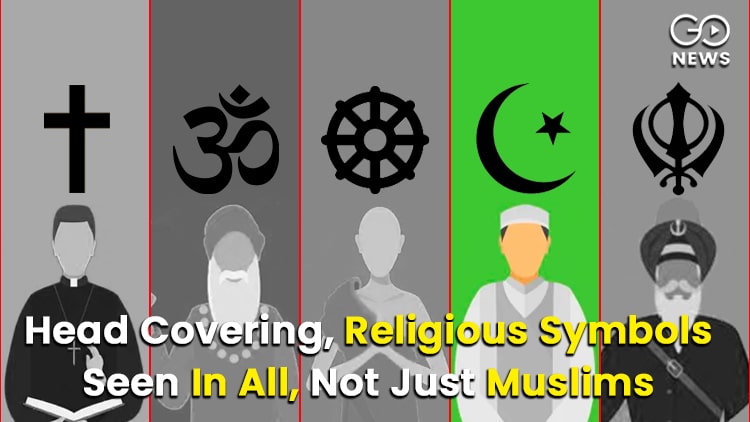 Amid the hijab row spreading to an increase in number of educational institutions in Karnataka, protests are been carried out in states where students are also boycotting their classes. On February 11th the Supreme Court refused to hear the petition on this controversy even though the case was already heard before in the Karnataka High Court. The court had already ordered on Thursday that any cloth whether Hijab or Saffron scarves which instigate people will be prohibited until the matter is solved.
Also Read:
Karnataka Hijab Row: Hearing Continues For Day 3 Today

Renowned American survey center, Pew Research Center which provides information on social issues, public opinions and demographic trends shows that as many as 9 out of 10 Muslim women in India cover their head when they step out of their homes in various forms.Apart from Muslims, head covering outside the homes is also common among Sikh women (86%)  Hindus (59%), Christians (21%), Sikh men wear a traditional turban(69%) and Buddhist (30%).The head covering is not the only commonality, there are other various ways which are also practiced by the different religions. Generally most Hindus are seen wearing a religious pendant such as image or symbol of God(52%), Christians wear a pendant of cross (61%),Sikh wear a bracelet which is commonly known as Kada (29%)and Sikh women practice keeping long hair (86%). Between 2013 and 2018, the number of countries that regulated women’s religious clothing by law or policy increased from 41 to 61. The number of countries where women were harassed for their religious or secular dress increased from 53 to 56 during this period.