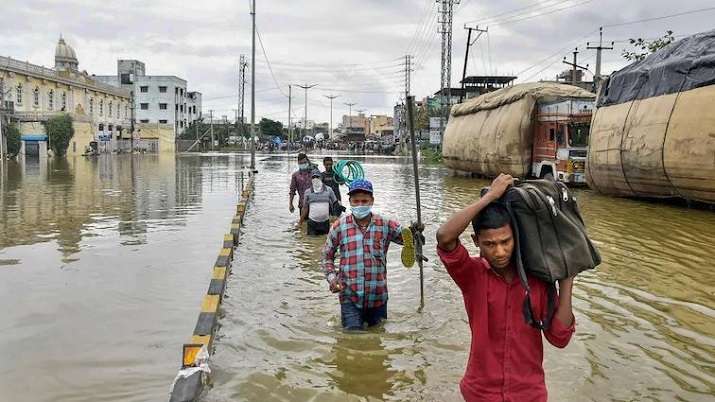 The death toll in Telangana due to rain and flood related incidents has jumped to 70 after days of heavy rains pounding the state. In Hyderabad, more than 50 people have lost their lives. Telangana Urban Development Minister K.T. Rama Rao said that in the last one week, 70 people have died in rain-related incidents in the state. Rao has appealed to the people living in low-lying areas to go to relief camps in view of the forecast of heavy rains in the next two days. Rao also said that for the second time after 1908, there was a record heavy rainfall in Hyderabad, due to which the state government had to send about 37,000 people living in the low-lying areas to relief camps. Also Read: Situation Tense But Under Control at Assam-Mizoram border; 4 Critical

Following the crisis, the Chief Minister of Telangana, Chandrasekhar Rao on Tuesday announced that all the houses which were completely damaged in the rain will be given assistance of Rs 1 lakh and owners of partially damaged houses will be given Rs 50,000. At the same time, KCR has announced Rs 10,000 for the downtrodden living in the lower area. Looking at the situation, he said that Hyderabad has seen such heavy rainfall after 100 years. However, meanwhile, the state government has said that according to preliminary estimates, there has been a loss of Rs 5,000 crore due to rain and deluge. On a question in this regard, Rao said that an interim report has been sent to the central government and a demand of Rs 1,380 crore has been sought for assistance. However, there is no response from the Centre yet. At the same time, more than 15 people have died due to heavy rains and floods in Karnataka. In northern Karnataka, severe floods have been caused due to the Bhima river flowing above the danger mark and a large number of villages in Kalaburagi, Vijayapura, Yadgir and Raichur districts are still submerged. Meanwhile, officials of the Karnataka State Natural Disaster Monitoring Centre (KSNDMC) said that 97 villages in its four districts were badly affected and the people living there were shifted to safe places. A KSNDMC official said, so far, 36,290 people have been evacuated. They have opened 174 relief camps where more than 28,000 people are staying.
TAGS Natural Disasters andhra floods telangana floods Floods Heavy Rain