"Hijab Not A Compulsory Practice Of Islam" : KHC 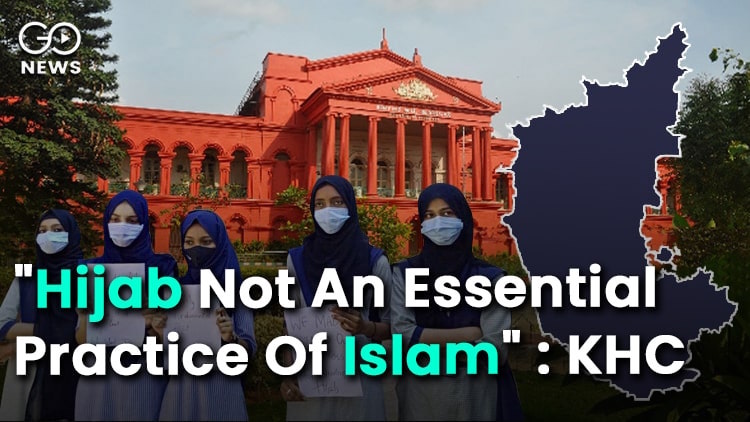 The Karnataka High Court has given its verdict on the hijab case. It has dismissed all writ petitions filed by Muslim girl students seeking permission to wear hijab in colleges and challenging the government order of February 5th. This decision has come from the Full Bench of High Court Of Karnataka. The court said that hijab is not a compulsory practice of Islam. The three judge bench comprising Chief Justice Ritu Raj Awasthi, Justice Krishna S Dixit and Justice JM Khazi delivered their verdict on the ongoing hijab controversy at 10.30 am today.
Also Read:
When Will Govt Increase Petrol-Diesel Prices?

The court said that the February 5 order of the Karnataka government is not unconstitutional. The court was responding to three key questions on the dispute: 1. Is wearing the hijab a necessary religious practice in the Islamic faith protected under Article 25? 2. Whether ordering school uniforms is a violation of rights? 3. Was the government order on February 5 issued without hesitation and clearly arbitrary? The bench heard the matter for 11 days before reserving the verdict on February 25. On the first day of the hearing, the court had passed an interim order directing Muslim girl students not to wear hijab, and Hindu students saffron shawls or use any sort of religious clothing. Allegedly, students from the Hindu community, wearing saffron shawls in protest against Muslim girl students, allegedly staged a well-planned protest and large-scale protests by saffron-clad students were held in several districts of the state. The grounds cited in the petition include that both freedom of conscience and the right to religion are guaranteed by the Constitution, yet girl students were arbitrarily barred from wearing the hijab. The High Court in its judgment has cited Professor Upendra Baxi's book The Future of Human Rights which states that, "Article 29 guarantees freedom of conscience to every person in India. It also guarantees that every person has the right to practice and propagate his religion but the word 'culture' has not been used in it which certainly shares a boundary with religion." The court observed that no case was made out for invalidating the order by the petitioners. The court also rejected the demand for a disciplinary inquiry against the school authorities, who denied admission to Muslim girls for failing to wear the uniform." Now when the court’s verdict is out the state had tightened up its security around educational institutions and large gatherings were banned in some districts. In an order, Bengaluru Police Commissioner Kamal Pant said that since the protests have disturbed public peace and order, the police have considered it necessary to initiate appropriate security measures.  All forms of gathering, movement, protest or function in public places are banned in Bengaluru for a week from March 15 to March 21. Schools and colleges are being closed in many districts. Section 144 has been imposed in Bengaluru, Udupi, Belagavi, Davangere, Hassan, Kalaburagi and Shivamogga. Karnataka Health Minister Dr Sudhakar K said on Twitter: "Hijab is not a compulsory practice of Islam and cannot be allowed in schools and colleges, Karnataka High Court rules. I welcome the decision as it is a uniform The focus should be on education in schools and colleges."

Responding to the verdict, CFI National President MS Majid said: "Karnataka High Court denied the constitutional rights of citizens. We will never accept a verdict which is against the Constitution and against attempts to suppress individual rights. The fight will continue. We appeal to the secular minded people to join this constitutional fight." Former J&K CM Omar Abdullah said on Twitter: "Very disappointed with the Karnataka High Court verdict. Anything you can think of hijab, it's not about a piece of cloth, it's a woman's right It's about how she chooses to dress."

Very disappointed by the verdict of the Karnataka High Court. Regardless of what you may think about the hijab it’s not about an item of clothing, it’s about the right of a woman to choose how she wants to dress. That the court didn’t uphold this basic right is a travesty.