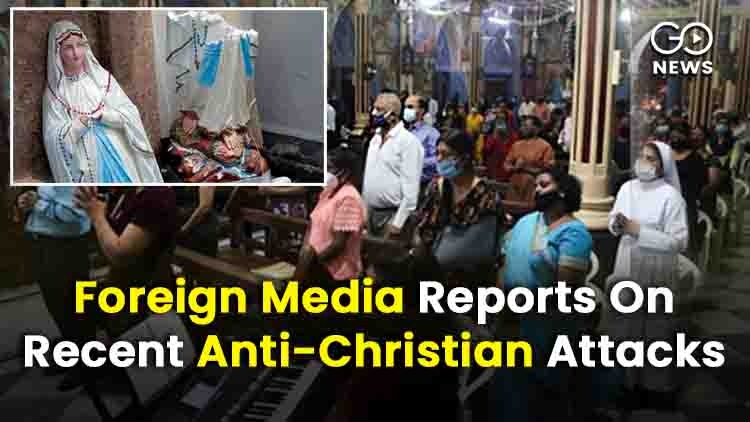 A sense of animosity is brewing in the country with increase in attacks against the Christian community. From statue vandalism, to disruption of Christmas celebration at a school, and the latest incident of Home Ministry of India denying FCRA clearance to the Missionaries of Charity (MoC), a Catholic religious congregation set up by Nobel laureate Mother Teresa.  On Monday, it was reported that denied Missionary of Charity in India has been denied the license to continue to receive funds from abroad, thereby cutting the charity off from vital resources. West Bengal Chief Minister also expressed shock on the matter and had tweeted that "Their 22,000 patients & employees have been left without food & medicines." She further states in her tweet, that while the law is paramount, humanitarian efforts must not be compromised.
Also Read:
Mother Teresa's Missionaries Of Charity's Funds Frozen By Indian Govt!

The amid concern growing of rise in incidents of communal violence and disharmony, trouble brewing domestically has garnered ample foreign media attention as well. British media company, The Guradian, reported the incident on its website on Tuesday i.e. December 28, with excerpts saying, "The home ministry, which made the decision on Christmas Day, said it had come across “adverse inputs” when considering the application.....The rejection of the application comes less than two weeks after Hindu hardliners accused the charity of carrying out forced conversions of Hindus to Christianity in a home for girls it runs in Vadodara in the state of Gujarat." Popular news media, BBC, too reported on the matter of Mother Teresa's Missionaries of Charity (MoC) being denied foreign monetary aid. The article, published by BBC on Tuesday, titled, "India blocks foreign funding for Mother Teresa charity."
The excerpts of the article states:
It (Missionaries of Charity) is one of the world's best-known Catholic charities. Mother Teresa was awarded a Nobel Peace Prize in 1979 for her humanitarian work, and she was declared a saint by Pope Francis in 2016, 19 years after her death. The government of Prime Minister Narendra Modi has sought to squeeze foreign funding for charities and other NGOs based in India. Last year, restrictions led to the freezing of bank accounts belonging to Greenpeace and Amnesty International. There have also been several attacks on religious minorities across India." Earlier this year, Prime Minister, on his visit to Rome to attend G20 Summit, had invited Pope Francis to visit India. Ironically, Modi's MP, Tejasvi Surya on December 25th, Christamas Day, said that "All religious mutts should take the initiative to bring back people from other religions, to Hinduism." He openly lobbied for conversion of the minority religions and also claimed that secularism has affected Hindus, which ensured atrocities by Muslims and Christians. In an article published on Aljazeera, on December 2nd, mentions the following reports of violence against Christian population residing in India. The lengthy news article, titled Why India is witnessing spike in attacks on Christians, churches has been written by authors Neel Madhav and Alishan Jafri. It contains the following excerpts...  "On October 3, a mob of nearly 250 Hindu vigilantes armed with iron rods ransacked a church in Roorkee in the northern state of Uttarakhand, which is governed by the BJP. Witnesses told Al Jazeera only about a dozen people were in the church when the attack occurred. Pearl Lance, the daughter of the church’s pastor, was allegedly molested by men, abused and attacked by women, and her phone snatched. Rajat Kumar, a staff member at the church, was hit with iron rods multiple times on his head, resulting in serious injuries. “They dragged me by my neck to the ground floor while raining blows on my face and back. I became unconscious after I was hit with a rod on my head,” Kumar told Al Jazeera, his right eye badly bruised and swollen." The article further states, "According to a report by human rights groups in October, more than 300 attacks on Christians took place in the first nine months of this year, including at least 32 in Karnataka. The report found that of the total 305 incidents of anti-Christian violence, four north Indian states registered as many as 169 of them: 66 in BJP-ruled Uttar Pradesh, 47 in Congress-ruled Chhattisgarh, 30 in tribal-dominated Jharkhand, and 30 in BJP-ruled Madhya Pradesh. At least nine Indian states have planned anti-conversion laws, including Chhattisgarh, which, activists say, has emerged as a “new laboratory” for anti-Christian hatred in India." The New York Times, a week ago, also reported on increasing crime against christian population in India. In an article titled, "Arrests, Beatings and Secret Prayers: Inside the Persecution of India’s Christians", the author raises the concern in the following excerpt: "To many Hindu extremists, the attacks are justified — a means of preventing religious conversions. To them, the possibility that some Indians, even a relatively small number, would reject Hinduism for Christianity is a threat to their dream of turning India into a pure Hindu nation. Many Christians have become so frightened that they try to pass as Hindu to protect themselves." Last Thursday, BJP ruling state of Karnataka introduced the Right to Freedom of Religion Bill, 2021 with a voice vote. The anti-conversion bill, which has been at the centre of political debate, proposes a prison term of up to 10 years for forced conversion.