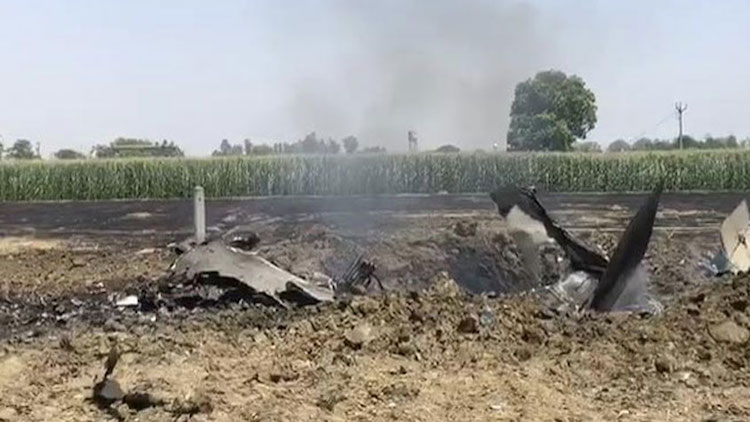 A MiG-29 multirole fighter jet of the Indian Air Force crashed at Chuhrpur village in Punjab on Friday. The jet during a training mission from an airbase near Jalandhar met with a technical snag after the take-off and crashed into a field in the village. The pilot ejected safely and was soon taken away in a rescue helicopter.

I am relieved to know that @IAF_MCC pilot ejected to safety in Hoshiarpur after his MIG-29 crashed today. Thank the local people for immediately rushing to the aid of the pilot. Proud of you all! pic.twitter.com/fcno2yQDck

“On May 08 at 1045h, one MiG-29 aircraft airborne on a training mission from an Air Force base near Jalandhar met with an accident. The aircraft had developed a technical snag and the pilot ejected safely as he was unable to control the aircraft,” the IAF said.

IAF MIG-29 (UPG) AIRCRAFT ACCIDENT#ThankYouIndia : The IAF's MiG-29 Pilot who ejected today near Hoshiyarpur was given timely assistance and care by the local people of Rurkee Kalan, Nawanshahr, Punjab.

This is not the first case of a crash of a military aircraft MiG-29. Earlier in November 2019, a MiG-29 aircraft during a routine training met with a crash in Goa. Both pilots aboard the aircraft escaped safely. It was then reported that the accident was caused due to fire in the engine while taking flight.  Government figures show that from 2014 to 2019, the army has suffered 30 plane crashes in which 12 people died. Apart from this, six helicopters, 9 trainer aircraft and three transport aircraft were damaged in the accident as per Lok Sabha data till July 2019. At the same time, seven aircrews and 27 service personal lost their lives.