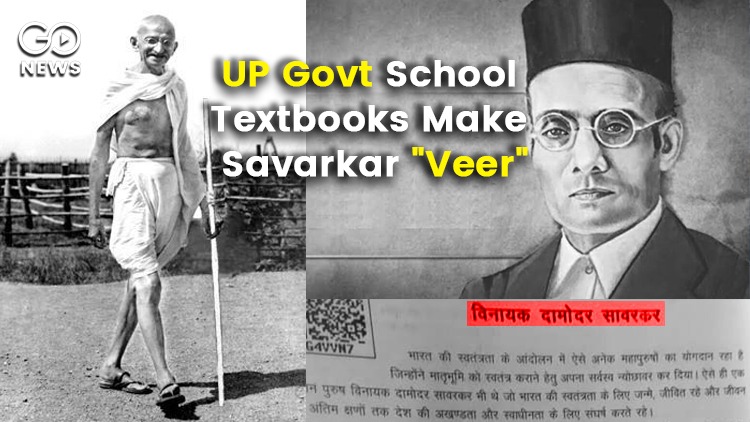 Uttar Pradesh Chief Minister Yogi Adityanath launched a new book from his residence. During the launch of ‘Savarkar: Ek Bhoole Bisre Ateet Ki Goonj’ (सावरकर- एक भूले-बिसरे अतीत की गूंज’), Adityanath said: “The contribution of Vinayak Damodar Savarkar to the freedom struggle can never be erased”. The incumbent BJP CM and his ministers do not merely give statements from such platforms, but take the next step in introducing this in the syllabus of the state’s government schools in the form of a proper school lesson.
Also Read:
Landslides: A Human-Made Tragedy

Yogi’s Claims On Savarkar, The So-Called ‘Veer’ During the book launch, Yogi Adityanath claimed that historians have not done justice to “Veer” Savarkar, and tried to erase his contributions to the Independence movement. He emphasized, however, that no one will succeed in doing so. Hindu nationalist organizations and the ruling party BJP have always agreed with and savoured the political fruits of the so-called ‘Veer’ Savarkar’s Hindutva ideology. Savarkar is called the father of Hindu nationalism by his supporters and the incumbent BJP claims to promote and propagate his ideology. It has thus always been accused of trying to establish Savarkar as a legitimate and significant national figure, particularly in context of the freedom struggle. Savarkar’s Apology Letter And Claims Of UP School Textbooks Savarkar’s critics base their views on a letter written by him in the infamous British prison of Kaala Paani in Andaman and Nicobar Islands. There, he wrote an apology letter to the British in which he pleaded to the British government to release him and promised not to participate in the freedom struggle as well. In this, he promised to always be loyal to the British. The Congress has always alleged that Savarkar supported the “Two-Nations Theory” which was ultimately implemented and led to the creation of Pakistan. Therefore, it s clear that there have been strong steps taken to install Savarkar as a brave freedom fighter in the government schools of Uttar Pradesh. The class 7th textbook in the schools reads: “Veer Savarkar was born for the freedom of India, lived, and struggled for the unity and independence of the nation until his last moments” However, the book does not mention that he apologized to the British, and neither does it mention that he promised loyalty to the British government in the future. Efforts To Establish Savarkar As Freedom Fighter In November 2019, Vice President Venkaiah Naidu had launched an English translation of the same book in question. At that time too, the Vice President had accorded the title of “Veer” to Savarkar and referred to him as a freedom fighter. Former Justice of the Supreme Court and Press Council of India president Markandey Katju has also expressed his views on Savarkar. He says that Savarkar was a nationalist only until the 1910s. This was the time when he was arrested and sent to the Kala Paani prison. The British reached out to him after he spent 10 years in the prison, asking him to cooperate with the government, which Savarkar accepted. Katju says that after his release from jail, the ‘revolutionary’ Vinayak Savarkar began the work of inflaming communal passions an promoting Hindu nationalism.