Indian PSUs Market Cap Down To 6.19%, Amidst Rampant Privatization

Today, the Finance Ministry will release an additional list of public companies to be disinvested. Rapid privatization has deepened existing inequalities and has enriched individual players even as the national economy as a whole is going through record lows. Dismantling the public sector has been one of the main policy priorities of the Modi government since its first stint in power.

As the next round of disinvestment announcements are due from the Finance Ministry, let us have a look at the status of Public Sector Undertakings in recent times. Data has shown that the market capitalization of PSUs in March 2021 was 14.2 trillion, which was the same as in March 2013, eight years prior. In 2013, the Market capitalization of PSUS was 24.2% whereas in 2021 it was 8.6%, showing that during this intervening time the market has grown by 2.81 times or almost thrice.

Message: Trying to get property 'name' of non-object

The graph shows a steady decline in the overall market capitalization of all PSUs. This comes during a period when the private sector has been making significant gains in the market. Last year, GoNews had reported on Mukesh Ambani’s RIL dwarfing out Indian government owned businesses in the stock market. In 2020, Financial Express also  quoted Bloomberg data to show that Mukesh Ambani’s RIL outgrew all other PSUs combined. It says that at the beginning of the year, PSUs had a total market cap of 19.3 Lakh crore while RIL had a market cap of 9.6 Lakh crore. However, by September 2020, RIL had a market cap of 15.30 Lakh crore whereas all PSUs combined had a market cap of 15.16 lakh crore. The government has itself acknowledged on multiple instances that the fall in market capitalization of PSUs is a trend that needs attention and must be reversed. In December 2018, DIPAM under the Finance Ministry stated that “The market capitalization of CPSE stocks constituted 9.4% of the total value of Market Capitalization of BSE as on 11.12.2018”. It had further said that “There was a significant erosion of CPSE stock especially from 2018 year to date - while the SSE Sensex and Nifty 50 grew at 3.57% and 6.21% respectively in contrast Nifty CPSE and S&P SSE CPSE fell by -25.49% and -25.33% respectively. The fall in prices of CPSE stocks is continuing.” In the same year, The Wire reported that “the combined value of all public sector banks has plummeted below that of one private lender- HDFC Bank”. It also found that PSBs (Public Sector Bank) saw their market value erode from “anywhere between 11.37% to 75.5%”. In December 2018, CPSEs (Central Public Sector Enterprises) had a market cap share of 9.4% which fell to 7.14% in May 2020. In January 2019, all PSUs had a combined market value of 10.5%, which hit a decade-low of 4.6% in June 2020 before showing a slight uptick in December 2020, when it was 9.7%. At present, the market capitalization value of all PSUs on the Bombay Stock Exchange (BSE) is 23.5 lakh crore, which is 6.19% of the total market. Media has reported that since the Modi government assumed power in 2014, the trend for overall stock market growth vs. the PSU index on the BSE have taken opposite trajectories. From 2014 to 2020, the BSE PSU index was down -36% while BSE listed companies as a whole saw an increase of 89% in market capitalization. 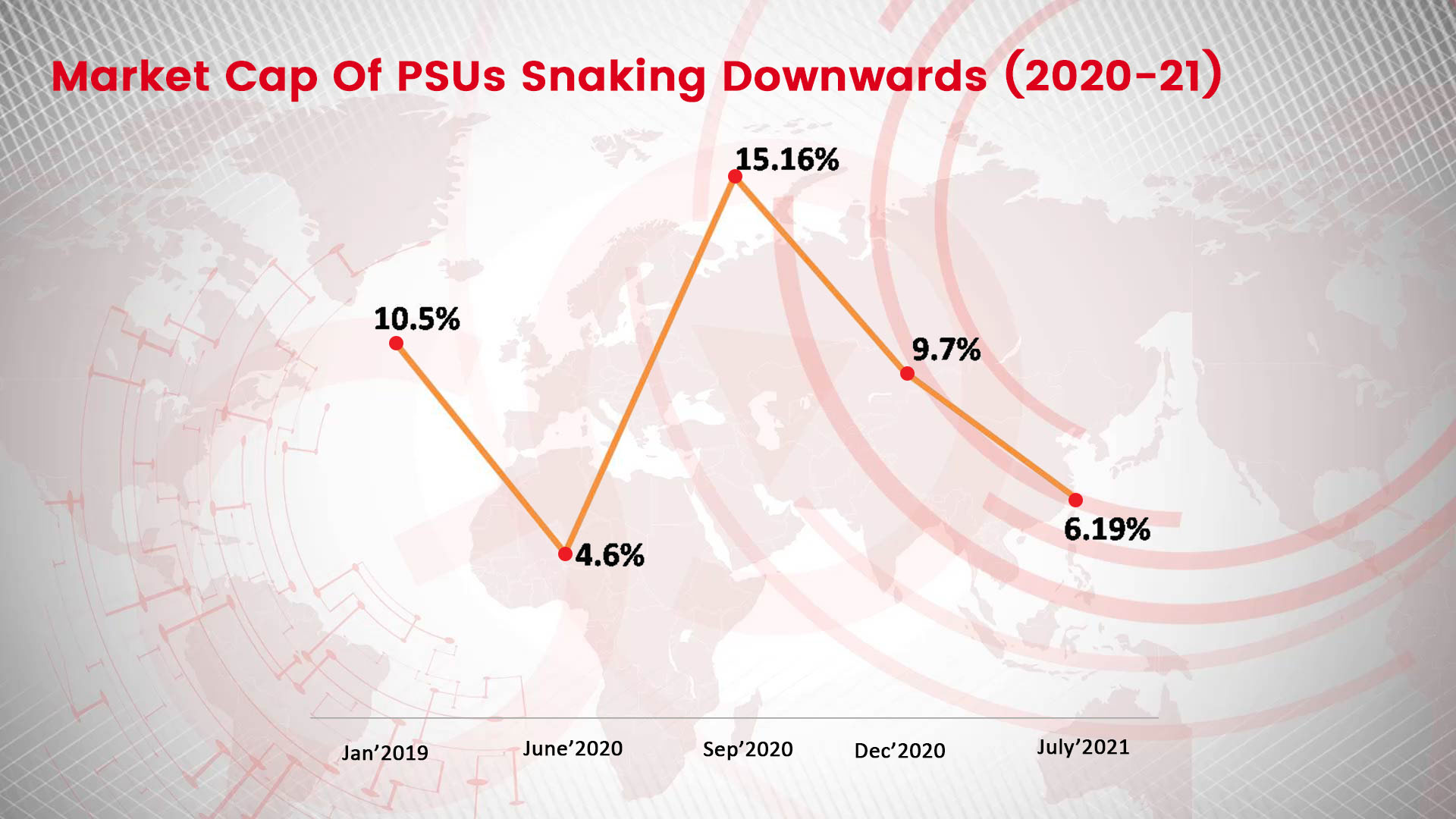 Today, the Finance Ministry has released the 6 lakh crore National Monetization Plan. The Railways and Telecom industries have been highlights in the national assets earmarked for monetization. By FY24, the Niti Aayog plans to monetize  ₹35,100 crores of telecom assets, and  ₹1.52 lakh crore worth of Railways assets by FY25. Prominent senior industry leaders and public officials have supported the asset monetization efforts, while political critics, journalists, civil society activists, and certain sections of society including public sector employees have expressed their strong opposition, claiming that such large-scale privatization is against the public good and collective stakes in national development. Rapid privatization has deepened existing inequalities and has enriched individual players even as the national economy as a whole is going through record lows. Dismantling the public sector has been one of the main policy priorities of the Modi government since its first stint in power. BY all indications, disinvestment is part of the government's core objectives and will not be slowed down any time soon.