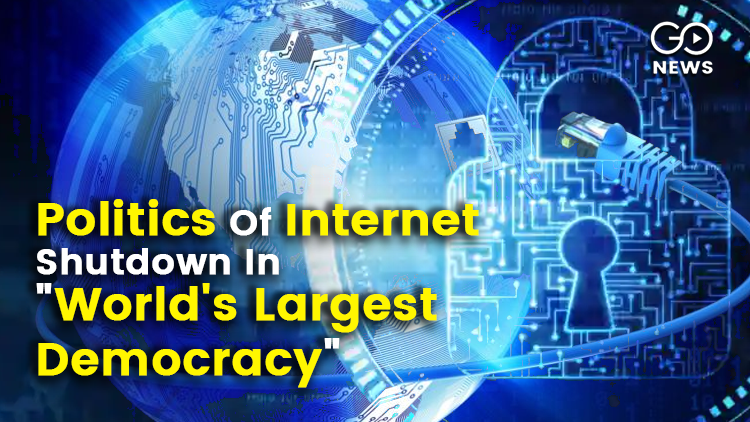 As the news of the violence in Lakhimpur Kheri district began circulating in the media, one of the first reactions of the administration was to promptly shut down the internet. This is hardly a new practice in India by now and neither does it ever face any serious or sustained questions either. Internet remains down in Lakhimpur Kheri and new information is not able to reach from there, including that on detained Congress leaders . Given the iron-clad grip on the ‘mainstream media’ that dominates screens and airwaves, social media has become a powerful alternative pathway to reach audiences directly, with one’s own narrative or perspective.
Also Read:
UP Govt Textbooks Make Savarkar A "Freedom Fighter"

Internet shutdowns are usually ordered on the basis of "public safety". However, it can also be argued that it is interested in ensuring that only ‘controlled’ narratives of its own preferred media emerge from protest hotspots rather than other viewpoints that may not be aligned to the ruling party’s interests. In 2019 during the Anti-CAA protests, the government imposed 106 shutdowns in one year alone. India is second in the world in terms of mobile subsribers but the ‘leader; in imposing internet shutdowns. Internet Shutdowns And Farmers’ Protests The Internet Freedom Foundation is a “digital liberties organization” that has taken a consistent stand against internet shutdowns. It created the hashtags #KeepItOn and #KeepUsOnline to create a momentum for this issue. It supported the farmers’ protests ever since their inception in 2020 and issued a joint statement which said: "We, the undersigned organizations and individuals, strongly condemn the internet shutdowns imposed by central and state government authorities to suppress the farmers’ protests at the borders of the National Capital Territory of Delhi”. Mentioning instances of violence and danger posed by farmers protesting on ground at the Singhu border, Gazipur border, and other places, it said: “It is against this backdrop that we raise alarm about the use of internet shutdowns by government authorities to suppress the free flow of information related to peaceful assembly and the fundamental right to protest.” It further says that there is “empirical evidence” to show that internet shutdowns can actually aggravate violence by blocking communication to organize peacefully. The heavy presence of police and paramilitary on such sites can also quell any illegal or dangerous activity, rather than depriving lakhs of people of the internet. The internet and social media are important tools in the hands of protestors. It allows them to directly state their own views and interpretation of facts on ground. It allows new information to emerge which aids further mobilization and awareness, such as the video of the Karnal SDM ordering security personnel to “break heads” of the farmers. It is significant that even during the protests against such an order and its implementation, which resulted in the death of 1 farmer from head injuries, internet services were shut off in Karnal and adjoining areas. Here are some internet shutdowns connected to the farmers’ protests: The website www.internetshutdowns.in recorded 106 shutdowns in 2019, 129 in 2020, and 35 in 2021. The total shutdowns in India were 542, of which 29 were recorded in Uttar Pradesh, 18 in Haryana, and 76 in Rajasthan. Legal Basis For Internet Shutdowns The law that allows internet to be suspended is the Temporary Suspension of Telecom Services (Public Emergency or Public Safety) Rules, 2017. However, in the Anuradha Bhasin vs. Union of India case [Writ Petition (Civil) No. 1031/2019], the Supreme Court ruled that indefinite suspensions are illegal and that the law only allows it as a temporary measure. It made two important observations: “suspension can be utilised for a temporary duration only”, and that internet shutdown orders are subject to judicial review. However, to skirt these conditions, governments at the state and central levels have resorted to “throttling” the internet by slowing it down. Imposing shutdowns even for short durations achieves its political ends rather than any real law and order objectives.