The attack on Lok Sabha MP and AIMIM National President Asaduddin Owaisi on Thursday resulted in the arrest of two youths by the Uttar Pradesh Police. Shubham and Sachin are the two young men that were arrested. One of the gunmen was purportedly apprehended by members of Asad Owaisi's convoy and afterwards handed over to the police. Following this occurrence, the government has granted Asaduddin Owaisi Z-Plus security protection. During questioning, the two reportedly expressed their displeasure with Owaisi and his brother, MLA Akbaruddin Owaisi, over their statements.
Also Read:
Sidhu Takes Pot Shots At Congress Leadership: Needs Weak CM

It is also claimed that the accused used to keep a careful eye on Asad Owaisi's remarks and was planning to assault him. He was found with a country-made pistol that he had recently acquired, according to the authorities. Police is now seeking the people from whom the gun was procured. The defendants will now be brought before the court, and the police will demand their arrest. Many pictures of accused Sachin have emerged on social media with BJP leaders including firmer union minister Mahesh Sharma and UP CM Yogi Adityanath. Relationship of "patriot Sachin Hindu" with BJP! Sachin is said to be a Bharatiya Janata Party (BJP) favourite worker. Many photos of Sachin with Bharatiya Janata Party leaders, MLAs, MPs, and local party presidents have been circulated on social media. On his Facebook page, Sachin calls himself "Patriot Sachin Hindu" and has been charged with attempted murder. While Shubham is a resident of Saharanpur, there is no criminal case against him. These photos of Sachin were acquired from his Facebook page, where he is pictured with Mahesh Sharma, a senior BJP leader and Centre minister. Mahesh Sharma represents Gautam Budh Nagar in the Lok Sabha. He has also served as the Center's Minister of Tourism and the Ministry of Civil Aviation and Environment's Minister of State. 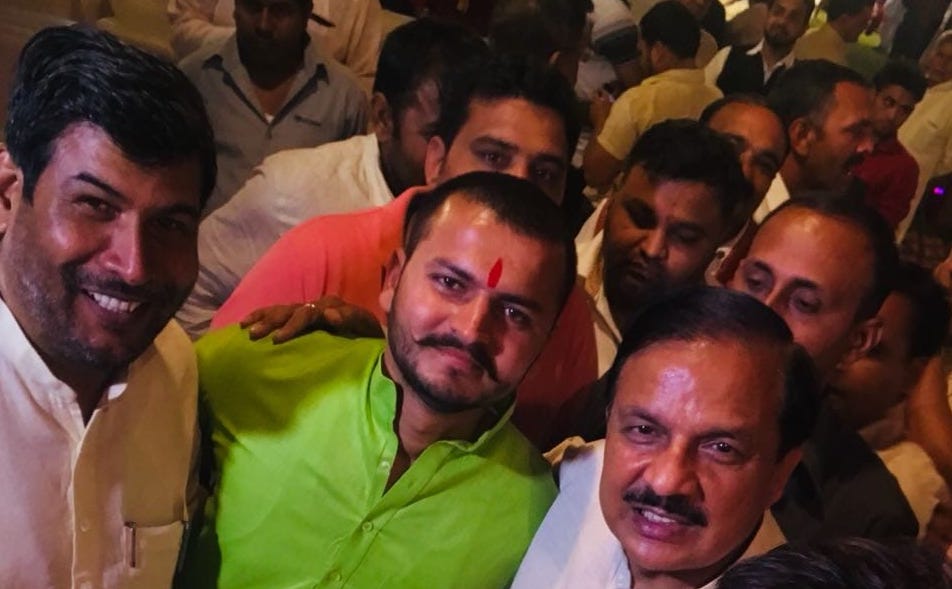 The alleged ‘patriot’ Sachin shared a picture with Mahesh Sharma on 30 September 2019 in which he wished the former minister on his birthday. Another big leader of Bharatiya Janata Party, Srichand Sharma is also seen in the same picture. According to a Facebook post by Sachin on 28 May 2019, Srichand Sharma is a "strong" BJP leader and MLC from Gautam Budh Nagar. According to Srichand Sharma's Facebook profile, he is a 'pracharak' of the Rashtriya Swayamsevak Sangh, a BJP MLA, a state executive member, and chairman of the housing complaints inquiry committee in the UP Legislative Assembly. Sachin considers Hindu BJP MLA Srichand Sharma as "Guru ji", which he has mentioned in many of his Facebook posts.

Sachin has also been in contact with BJP MLA Dhirendra Singh from Jewar, according to the Facebook post, and has shared images on social media. In a photo shared on September 20, 2017, patriot Sachin can also be seen with UP BJP general secretary Sunil Bansal. Sachin Hindu's Facebook status reveals that he is a BJP worker. On July 7, 2019, he posted a photo purporting to display his membership number. 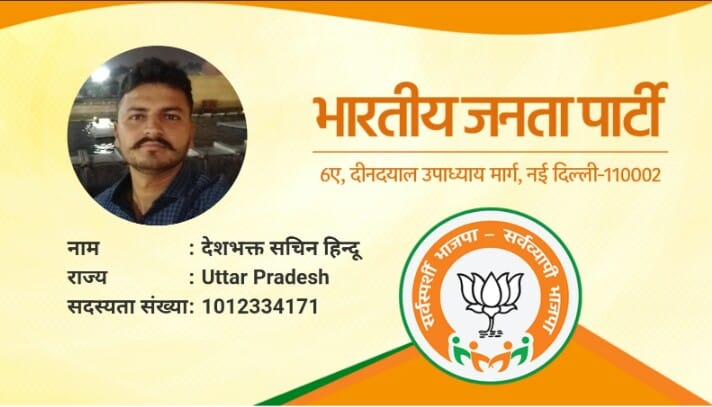 Aside from that, ‘patriot’ Sachin Hindu's social media page reveals that he is a Chandrashekhar Azad supporter. He posted an edited photo of Chandrashekh Azad with the caption "I am proud of you" on July 23, 2017. Following that, he published some more photos with Chandrashekhar Azad's statue, in which he flaunts his moustache.