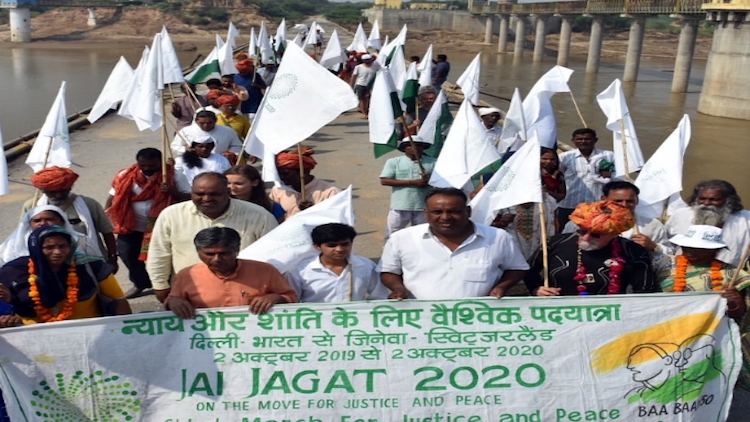 The ‘Jai Jagat’ march began on the occasion of the 150th anniversary of Mahatma Gandhi. Representatives of 12 countries are spreading the message of non-violence and peace through this march, which will reach Switzerland’s Geneva on October 2, 2020, after covering a distance of 11,000 kms. People have become part of this march in the hope of justice and peace; it is their dream that peace prevails in all parts of the world and people don’t face any problems. Also Read: Coronavirus Closes Kartarpur Corridor

This march kicked off from Mahatma Gandhi’s memorial Rajghat in Delhi on October 2, 2019. Apart from capital Delhi, the march will pass through several states of India and along with 50 marchers from 11 other countries, it will reach Geneva on October 2, 2020, after a 365-day-long march traversing 10 nations. Its motive is to raise issues like non-violence, justice, poverty eradication, climate crisis, banishing inequality and several other concerns. The main objective of this march is freedom from all kinds of violence and it also imagines the prevalence of peace and happiness. This march aims to abolish discrimination, partiality and inequality. It also plans to provide people across the globe the right to lead a self-respecting existence based on equality. Among its other objectives are keeping nature safe from the effects of climate change, stopping the use of chemical fertilisers and plastic and shutting industries spewing carbon emissions, thus making nature healthier. Geneva is home to several organisations across the world, which control and impact the entire world through their policies. Therefore, this march is being taken to Geneva. Through this march, not only will an atmosphere of peace and harmony prevail around the globe, but an attempt will also be made to ensure that everyone gets justice and can live their lives as equals.
TAGS Rajghat Gandhi memorial Geneva Switzerland non violence 150th anniversary Mahatma 150 Bapu Mahatama Gandhi Jai Jagat march