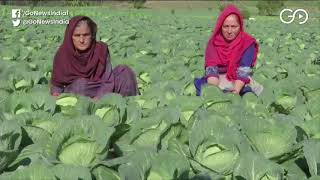 Surrounded by hills on all four sides, green agricultural fields are a treat for the eyes in Sunderbani in Jammu and Kashmir’s Rajouri, where farmers have been engaging in organic farming in the past few years and changing their lives. Through organic farming, not only has yield risen but farmers’ income is also increasing and most importantly, their health has also improved. Farmers here are making good profits from organic farming. They plant seasonal vegetables and fruits, which provides a good quantity of yield and that leads to good income. Also Read: Sri Lankan President Dissolves Parliament, Elections On April 25

Earlier, they had no irrigation facilities and had to spend a lot of money on buying manure and seeds from the market. Several times, the farmers found it difficult to even recover the cost of farming.  But now, according to organic farmers, around 250 people are engaged in organic farming in the area and although vegetables and fruits are sold as soon as they reach the market, they have to face some difficulties sometimes. Organic farmers want the state government to make seeds and other requisite resources available to them on time, so that they can do better farming and new avenues of income open up for them. Meanwhile, according to the Agricultural Extension Officer, the government’s attempt is to make all facilities available to farmers on their doorstep.  For this, they have conducted a survey according to each Panchayat after which, their attempt is to make agricultural equipment, seeds and irrigation apparatus available to farmers according to their requirements, so that apart from this village (Sunderbani), people from the remaining three Panchayats can also engage in organic farming. Although agriculture makes up for just 15% of the Indian economy, around 70% of the country’s population is dependent on it. Earlier, the use of chemical fertilizers was leading to reduced cost of farming.  Meanwhile, organic farming is leading to increased land fertility and Sundarbani’s farmers, through organic farming, are proving that if crop yield is to be increased and agricultural lands are to be saved from destruction, then efforts will have to be made by them on their own.

#Organicfarming is changing farmers' lives in #JammuAndKashmir's #Rajouri. Organic farming has not only increased production but also their income and most importantly it has improved farmers' health @RumanaAlvi4
More @ https://t.co/1jM0gYe7ue pic.twitter.com/2I6D1HXFGP